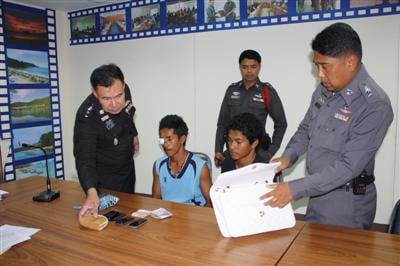 At the press conference, police presented Arnon Kongnoon, 21, from Satun, and Mr Chaisiri, 21, from Krabi.

Also presented was the motorbike the pair used to allegedly carry out the robberies as well as four mobile phones and 1,050 baht in cash.

Mr Chaisiri had more than 100 fights against top-level opponents at both Lumpini and Ratchadamnoen stadiums in Bangkok before an injury forced him into early retirement.

Before their arrest. both men worked as paddlers for a Phuket-based company offering kayak tours, police said.

According to police, in performing the robberies Mr Chaisiri drove the motorbike with Mr Arnon riding pillion and snatching valuables from unsuspecting members of the public, usually women.

The men were arrested after Rattikarn Kahapana reported to police at 2am yesterday that her shoulder bag, containing a mobile phone, cash and important personal documents, had been snatched from her by two men on a motorbike near the Safari Pub at the southern end of Patong.

Half an hour later, Sudarat Mupila, 25, from Nongkhai, also reported being robbed by two men on a motorbike, this time near the entrance to the Meridien resort complex.

After being informed of the first theft, Kathu Police notified Chalong Police, who set up checkpoints around Karon to intercept the robbers, who were last reported to be heading south.

Soon after, Mr Chaisiri and Mr Arnon arrived at a checkpoint near Baan Kata School, but refused to pull over and sped off towards Chalong Circle.

Both men confessed to committing “many” robberies in Phuket, police said.

Chalong Police are asking other possible victims to come forward and identify the men.

Police commented that the pair appeared to be seasoned bandits with little respect for the law, as evidenced by their carrying out of multiple robberies in succession.