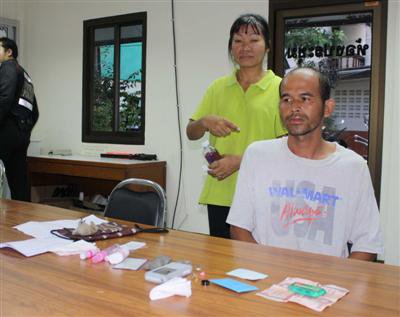 PHUKET: A man arrested for stealing a masseuse’s bag in Karon told police that his wife’s constant complaining drove him to commit the crime.

Chalong Police at 5pm on Wednesday arrested Sittha Rattanaphan, 36, at the Andaman Seaview Hotel in Karon, seizing as evidence a Honda motorbike and a brown bag containing 200 baht in cash, a mobile phone, an ATM card and important personal documents.

The items belonged to 49-year-old masseuse Kallaya Muangwichian, an employee of the Family Massage shop.

During questioning, Mr Sittha, from Nakhon Sri Thammarat, told police that he worked helping his wife sell food at a shop next to the Nuanrat Gold Shop in Karon.

Tired of his wife’s constant complaining, he drove off on his motorbike to get a massage, he told police.

He was welcomed at Family Massage by Ms Kallaya, but told her he had to “wait for his wife” before the massage could begin.

When Ms Kallaya’s attention was diverted, he grabbed her bag, jumped on his bike and sped off.

Ms Kallya pursued him on her own motorbike, screaming for assistance.

At the intersection of the beach road and Luang Por Chuan Road in Karon, two young men on another motorbike who had joined the pursuit cut off Mr Sittha and kicked his bike over.

Mr Sittha fled inside the nearby Andaman Seaview Hotel, where he was later caught hiding beneath a staircase in the laundry area.

He later confessed to the crime, telling police that his anger over his wife’s constant complaining had driven him to commit the crime.

The reaction of Mr Sittha’s wife to news of her husband’s arrest was not reported.