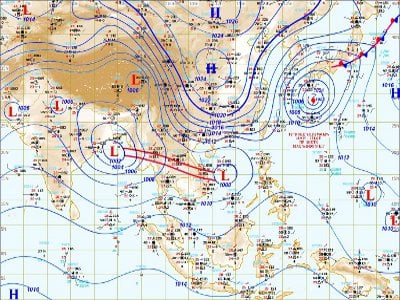 PHUKET: The Thai Meteorological Department (TMD) has issued a “heavy rain” warning for Phuket and almost all of Thailand.

The warning, simply entitled “Heavy Rain over Thailand”, was issued at 5am today by the TMD’s Weather Forecast Bureau in Bangkok.

The source of all the precipitation over the central plains region is a monsoon trough slowly moving across central Thailand, while an active southwest monsoon prevails over the Andaman Sea, southern Thailand and the Gulf of Thailand.

More rain and isolated heavy rainfalls are likely through to Friday in most of Thailand except the North and upper Isarn.

Wind-driven waves of up to four meters are expected over the next few days. All ships should proceed with caution, and small vessels should keep ashore until conditions improve.

Locally, the 24-hour report issued at noon today by the Southern Meteorological Center at Phuket Airport calls for “fairly widespread thundershowers” covering 70 per cent of the province.

The Kasikorn Research Center said the full cost will not become clear until the last quarter of the year, given that the floods struck just as rice farmers were about to harvest their crops.

The overall economic toll will jump even higher if authorities fail to shield Bangkok from floods, the center said.