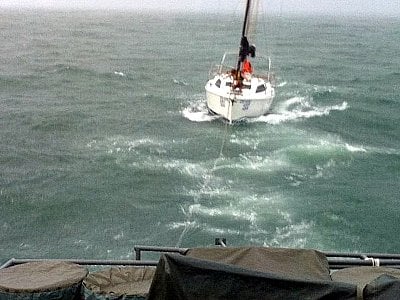 PHUKET: Two foreigners sailing to Phuket from Langkawi in Malaysia are safe after being rescued from turbulent seas by the Royal Thai Navy off the coast of Satun early this morning.

Vice Admiral Choomnoom Ardwong of the Royal Thai Navy Third Area Command at Cape Panwa, Phuket, was notified of a distress call from the sailing yacht Aqua at 1:45am.

Sailors Gionata Bellagamba from Italy and Luke Lockyer from South Africa reported that they could not make landfall at the southern Thailand province of Satun due to strong winds and large waves.

The Royal Thai Navy dispatched a rescue vessel at 2am, arriving to render assistance at 4:30am, according to a report.

The report said the two sailors were found floating in the water and the boat was suffering a battering from the surly weather.

With Mr Bellagamba and Mr Lockyer safely on board, the Navy vessel took Aqua under tow.

Both vessels arrived at a safe port at Satun at 8 am, with both men reported to be alive and well.