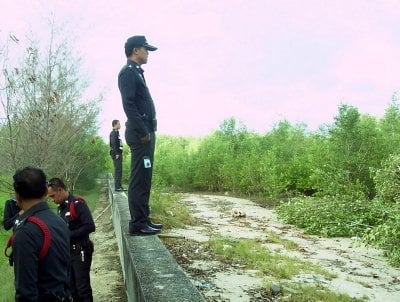 PHUKET: Swift action by a Phuket village headman saved several rai of mangrove forest from destruction by encroachers, but not before three rai had already been cut down.

Sinchai Limsakul, headman of Palai Village in Chalong, alerted police to the destruction at 4pm yesterday.

Some of the uprooted trees were planted by Chalong Tambon Administration, government officers and villagers in honour of HM The Queen’s birthday, he said.

Mr Sinchai went to Chalong Police Station to inform officers that four men had been seen clearing the area, part of a mangrove forest covering many tens of rai.

Mr Sinchai said he alerted the police because he wanted the authorities to protect the forest, the last remaining mangrove stand in Palai Village and thus highly cherished by local villagers.

The most important thing was that the forest had been planted in honour of the Queen’s birthday, he said.

It was hoped that planting the forest would encourage villagers to cherish the natural resources of the village. Despite this, villagers failed to alert police when the four men began clearing the trees, he said.