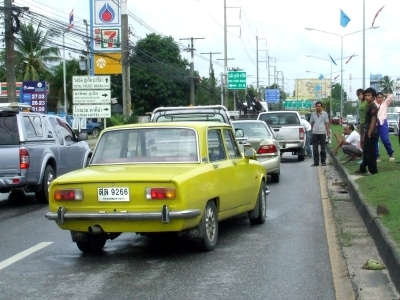 PHUKET: An Alfa Romeo was among five vehicles damaged in a road accident near the entrance to the Boat Lagoon marina in Phuket this afternoon.

The accident, on Thepkrasattri Road southbound in Koh Kaew, appears to have been caused when one vehicle braked suddenly.

The driver of a pickup that was the first of the five vehicles damaged told the Gazette the car in front of him in the passing lane came to a sudden stop, causing him to slam on the brakes.

Fortunately no injuries were reported.

The mishap should serve as a reminder to other motorists of the need to maintain safe braking distance while driving.

This is especially true in rainy conditions when roads are slippery, as might be the case this evening.

The Meteorological Department’s forecast for Phuket for the 24-hour period starting at 5pm today calls for “fairly widespread rain covering 70% of the island, with isolated heavy rain in some areas.”