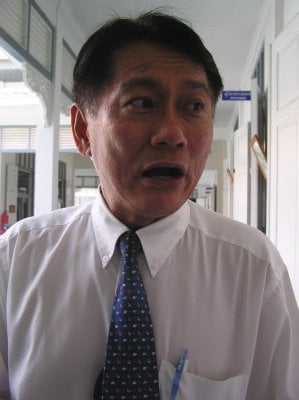 Krai Tungsanga, President of Pyramid Development International Co (PDI), explained that a feasibility study into the LRT proposal began in October last year and will continue until May this year.

In its first report to Governor Udomsak Uswarangkura, on November 17 last year, PDI proposed an LRT system that would consist of a loop through the Patong area to the City and then through Thalang back to the airport.

However, as K. Krai explained at the Governor’s weekly CEO meeting today, that route would be extremely difficult to develop because it would require the purchase of large amounts of private land, and would need a huge amount of power to get the train across hilly areas.

He recommended instead that the LRT route run only between the airport and Phuket City.

He said, “Our study shows that because the 40km distance is already connected by a four-lane road [with median strip], the LRT system could be built down the middle of the road and would not require the purchase of additional land.

“This route could provide a service to match the standard of any international city.”

“The one-way LRT ticket price would probably be 100 baht or more. Public hearings to determine whether or not the Phuket public favors an LRT system on the island are planned for March and April this year,” K. Krai said.

Get your smart card: Mayor