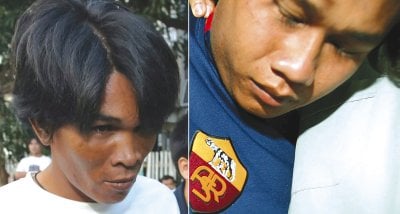 KOH SAMUI (The Nation, Phuket Gazette): The two fishermen who have confessed to raping and killing 21-year-old Welsh student Katherine Horton were drunk and had been watching a pornographic movie before swimming ashore to find a victim, the Deputy Police Commissioner, Region 8, Pol Maj Gen Santhan Chayanon, said yesterday.

“They said they intended to find a woman to have sex with after watching the adult movie,” Gen Santhan said.

A police officer who asked not to be named told the Gazette that the two, Wichai “Loh” Somkhaoyai, 24 and Bualoi Kosit, 23, were on board a fishing boat. “The captain was not on board, so they got drunk and watched a pornographic DVD, which made them sexually excited.

“They decided to find somebody to satisfy their lust and swam ashore where they saw Ms Horton strolling along the beach talking on her phone.

“Wichai tried to grab her, but she scratched his face, so he took a beach umbrella and beat her unconscious, then raped her. After both finished raping her, they used the same beach umbrella to beat her to death. After that they dragged her body back to the beach and threw her in the water.”

Gen Santhan said the rape had taken place behind a pile of rocks about 40 meters from the initial attack.

The two returned to their fishing boat after the crime and went out on a fishing trip on another, larger, boat the next day, Gen Santhan explained.

The Central Investigation Bureau Deputy Commissioner, Pol Maj Gen Asavin Kwanmuang, said that investigators zeroed in on the two men after learning from their colleagues that they had suspiciously asked to go out to sea again without taking a break ashore like the other fishermen.

“Police later went aboard that boat and took 29 crewmen for questioning. Two of them confessed to the crime during interrogation,” he said.

The two suspects were flown to the Institute of Forensic Medicine in Bangkok early yesterday morning for a DNA test before being taken back to Samui for detention.

DNA analysis of the semen recovered from Ms Horton’s body showed that it matched the blood samples taken from the two suspects, and police have used this as scientific proof to back up their arrests, said Deputy Police Commissioner Pol Gen Preowpan Damapong.

He added that he had instructed police at all local tourist destinations to strengthen security measures for tourists to prevent any more crimes in the wake of Ms Horton’s murder.

The Police Commissioner, Pol Gen Kovit Wattana, yesterday gave 100,000 baht to the police team investigating the case as a reward for having made the arrests quickly.

The two fishermen will appear in court tomorrow on charges of gang rape and premeditated murder.