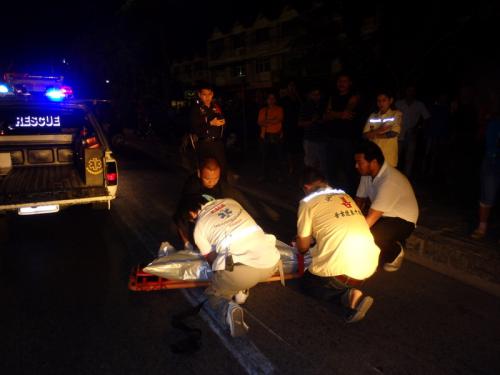 PHUKET: A woman with Alzheimer’s disease who had wandered away from home was killed in a hit-and-run motorbike accident in Thalang last night.

“My mother had Alzheimer’s, but she could walk well for her age and often went missing because of her illness,” said her son, 49-year-old Manas Parteep Na Talang.

“She was last seen in the early afternoon. She left the house and no one knew where she was. We searched for her until a neighbor told us about the accident at about 7:45 pm.”

“Eyewitnesses said that Mrs Pranit was crossing the road but didn’t see a motorcycle speeding toward her, as the road was dark,” said Lt Peerasit Noopayan of the Cherng Talay Police, who responded to the accident near Ban Suan Yu Charoen 5 housing on Srisoonthorn Road.

“She was struck by the motorbike and hit her head on the ground. She died instantly,” he said.

Eyewitnesses were not able to see the motorbike’s license plate as the driver sped by, he added.

“I hope my mother is at peace and no longer in pain,” said Mr Manas.