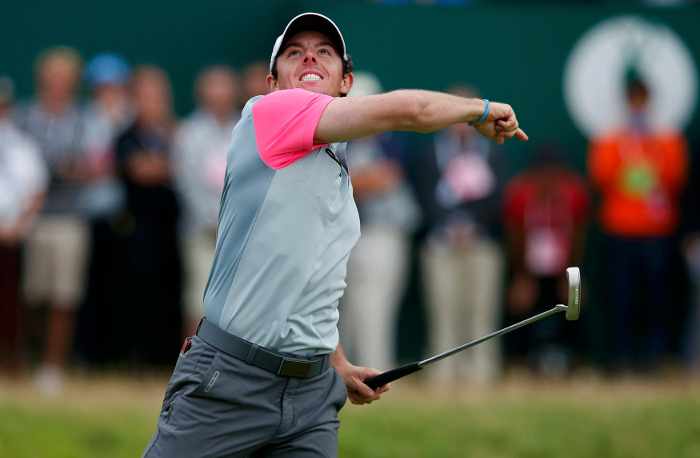 Rory McIlroy suffered several anxious moments but kept the jitters in check to rubber-stamp his status as the newest golfing great by landing the first British Open title of his career on Sunday.

The 25-year-old Northern Irishman watched Sergio Garcia (66) cut his overnight lead from six strokes to two before repelling the last-round charge by his European Ryder Cup team mate to land his third major in a tantalising finish at Royal Liverpool.

McIlroy returned a closing 71 for a 17-under total of 271 to become the third youngest player in history to capture three of the four majors, following Jack Nicklaus (23) and Tiger Woods (24).

“It wasn’t easy today and I just needed to stay focused, in the present and keep my concentration,” he told the BBC after picking up the coveted Claret Jug and a first prize of 975,000 pounds ($1.67 million).

“The lead never got less than two shots so I always thought I had a little bit of a cushion. To be three legs towards the grand slam is a pretty good achievement and it feels incredible.”

Garcia, still striving to shed the unwanted tag of being one of the best players never to win one of the ‘Big Four’ prizes, pushed the 2011 U.S. Open and 2012 U.S. PGA champion all the way before settling for a share of second place.

The 34-year-old Spaniard was two shots adrift and right in the hunt until he suffered a calamity at the 161-yard 15th, the shortest hole at Royal Liverpool.

Garcia’s tee shot found a deep greenside bunker and he made a heartbreaking bogey four after taking two strokes to get out.

He ultimately shared the runners-up spot with Rickie Fowler on 273. The 25-year-old American was always on the fringe of the battle as he closed with a well-crafted 67, his fourth sub-70 score of the week.

Former U.S. Open champion Jim Furyk (65) equalled the best round of the week to finish fourth on 275.

Woods, playing among the back markers, ended his campaign with a disappointing three-over 75 for 294, six over.

The former world number one was making only his second competitive appearance since undergoing a back operation in March.

McIlroy may have been a Manchester United fan plying his golfing trade in the territory of their rivals Liverpool but he was given a rousing reception when he walked on to the first tee.

The hairs on the back of his neck were no doubt standing on end as the crowd repeatedly yelled “Rory, Rory, Rory”.

The world number eight, who will rise to second in the rankings as a result of his win, seemed to want to send an early statement of intent as he plucked the driver out of his bag and launched a long, booming effort straight down the middle of the fairway.

An opening birdie, however, failed to settle him down and he dropped shots at the fifth and sixth.

When McIlroy then found rough off the seventh tee, seasoned observers were starting to wonder whether the wheels were about to come off.

The 25-year-old then summoned the spirit of a true champion, splashing out spectacularly from a greenside bunker to 12 inches to save par.

Garcia, playing up ahead, was turning into McIlroy’s biggest threat as he sprinted to the turn in a flawless 32.

The excitable Spaniard started to evoke memories of his youth as he bounced around like a schoolkid after an eagle three at the 10th ignited the galleries.

At the next hole Garcia pleaded with his ball “please be good, please, please be good” but it failed to listen as it ended up 40 feet short of the flag.

The bogey on 15 then effectively put paid to his challenge, despite collecting more birdies on the 16th and 18th.

Garcia produced a typical show of emotion as he walked off the final green, blowing kisses and repeatedly tapping his heart to show his affection for the fans.

“Obviously 15 was a mistake,” he said after matching his second-place finish behind Padraig Harrington at Carnoustie in 2007. “It’s difficult when you’re in a situation where you know you can’t make a mistake.

“I got within two shots but every time I got closer he kept making one birdie and not letting me get any closer than that. Overall I thought it was a great week.

“I love the 18th. That’s a feeling that nobody can take away from me and one of the reasons why I love this championship.”

Back down the 17th, McIlroy missed the green with his approach but a glorious chip to 12 inches made sure he turned the final hole into a victory parade.