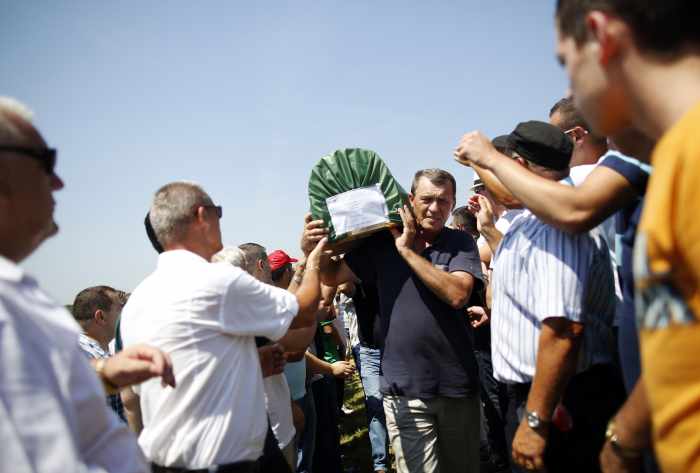 PHUKET: The remains of 284 victims of the Bosnian war were laid to rest on Sunday having been unearthed from what is believed to be the largest mass grave of Europe’s worst conflict since World War Two.

Thousands of relatives from Bosnia and across Europe gathered in collective Islamic prayer for the mainly Muslim Bosniak victims, including 21 members of the same family, on a soccer field in the northwestern town of Kozarac.

“I think we will be at peace tomorrow, when all this is over,” said Amela Kadiric, who came from the Netherlands to bury her father and three uncles, killed in a wave of Serb ethnic cleansing during Bosnia’s 1992-95 war.

Around 100,000 people died in the conflict, which scattered Bosnians across the globe. Asked how many members of her extended family had been killed, Kadiric replied: “Nobody knows.”

The remains of more than 430 people have been found so far in the Tomasica grave near the town of Prijedor. The grave was deep, and the soil mostly clay, meaning there was relatively little decomposition among many of the bodies.

Witness accounts suggest around 1,000 people were tossed into the gruesome death pit but later dug up and reburied elsewhere as part of a systematic bid to conceal evidence of atrocities.

The Prijedor region was a stronghold of ultra-nationalist Serb forces who killed more than 3,000 Muslim Bosniaks and Catholic Croats there and drove tens of thousands from their homes.

Some were tortured and killed in notorious Serb-run detention camps, while others died in their homes, crimes for which 16 Bosnian Serbs have been sentenced by a special U.N. war crimes tribunal to a total of 230 years in prison.

Bosnia’s autonomous Federation, made up of mainly Bosniaks and Croats, declared Sunday an official day of mourning. The Serb Republic did not.

After the prayers, the coffins were transferred for burial at six local cemeteries.

Samir Karupovic, who now lives with his mother in Croatia, was just 17 months old when his father Redzep was killed in July 1992 by Bosnian Serb forces along with 1,846 others in the space of three days in the Prijedor region. Whole families vanished.

On Sunday, Karupovic sat silently gazing at his father’s picture, his arms draped over the coffin that housed his remains.

In Biscani village alone, at least 218 people were killed in a day, among them 44 members of the Hegic family, officials said. Twenty-one of them were found in the Tomasica mass grave last year and buried on Sunday.

Among them were five sons and the husband of Emina Hegic, now 83 and living in the United States, whose family decided not to tell her about the exhumations and ceremonies on Sunday for fear of her reaction.

Suad Tatarevic buried six brothers and his father along with five other relatives found in the grave.

“We have lived in hope for 22 years, and now have to face that they are gone,” Tatarevic said.

“At least, we’ll be able to visit their graves. This is our land, we were born here, here we’ll be buried.”