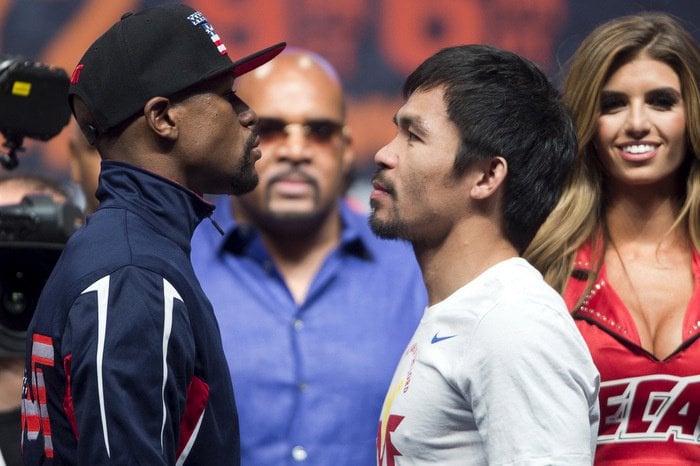 ** Fight of the century live, 10am Phuket time this Sunday **

PHUKET: Floyd Mayweather Jr and Manny Pacquiao weighed in for what has been labeled the ‘Fight of the Century’ on Friday, promising to deliver on the massive hype and give fans the excitement they deserve.

What had been a subdued buildup to the most anticipated fight in decades exploded to life when Pacquiao and then Mayweather entered the MGM Grand Garden Arena to thumping hip hop music and deafening cheers from a seething crowd of 11,500, some of whom had waited three hours for a glimpse of the two boxers.

Pacquiao, 57-5-2 (38 knockouts) looking relaxed and confident, weighed in one pound lighter than the undefeated Mayweather 47-0 (26 KOs), tipping the scales at 145 pounds for Saturday’s bout.

Their meeting is expected to be the biggest grossing prize fight of all-time. Even in Las Vegas, where fortunes are won and lost on the roll of the dice, Mayweather and Pacquiao have Sin City abuzz over the megafight this weekend that will generate millions and reshape the sport business landscape.

From US$100,000 ringside seats to $150 million paydays, Saturday’s long-awaited showdown (10am Sunday, Phuket time) between the greatest fighters of a generation is expected to be the richest fight of all-time and smash records in knockout fashion.

“It is precedent setting and it breaks every financial model known to man,” said Rick Horrow, sports lecturer at Harvard Law School. “The pay-per-view is $100, the tickets are almost unaffordable for even the millionaire fight fan.

“The numbers are almost unrealistic yet we have said that about a lot of things in global sports: television rights, $2 billion franchises, billion-dollar stadiums.

“So nothing surprises me anymore, but this in many ways is a watershed event for boxing and maybe the business of sport.”

Mayweather and Pacquiao will bank a ransom after the fight. Their night’s work is likely to land both men at the top of Forbes’ 2015 highest-paid athletes list.

The undefeated Mayweather (47-0) is guaranteed $120mn and Filipino Pacquiao (57-5-2) is assured $80mn, but could top those figures depending on pay-per-view (PPV) sales.

Showtime and HBO will jointly broadcast the bout, which is one of the most eagerly anticipated in boxing since the 1975 ‘Thrilla in Manila’ between Muhammad Ali and Joe Frazier.

The current PPV record is 2.5mn buys for a 2007 fight between Mayweather and Oscar De La Hoya, but Saturday’s bout should obliterate that mark with at least 3mn boxing fans expected to tune in.

“A lot of people over the last half dozen years have been saying, ‘Well MMA or UFC is taking over,'” famed ring announcer Michael Buffer said. “MMA, UFC, no doubt about it, are very successful and have a hard core and loyal group of fans… but they don’t have the scope or the worldwide appeal that boxing does.

“Boxing is huge in Russia and the eastern European countries. Asia, of course, with Pacquiao. Chinese fighters now have started to step up.

“When you have a billion people, if you just get 10 per cent of the population to watch a fight on television, you do the math.”

And the numbers are eye-popping. While sport fans have grown numb to multi-million soccer transfer fees and routine US$100mn player contracts, the figures surrounding Saturday’s fight have provided a jolt.

With Showtime and HBO predicting unprecedented pay-per-view numbers, ticket brokers have also been startled at the staggering prices on the re-sale market with some ringside seats on StubHub commanding $109,000.

The MGM Grand Garden Arena, which has a capacity of 16,800, will be packed with high rollers, A-listers, entertainment moguls and business tycoons, tickets out of reach for all but the rich and famous with only 500 offered for sale to the general public. Those 500 tickets were sold in less than 30 seconds after their release Thursday last week.

As usual, casinos up and down the Las Vegas Strip will flash the names of big-name headliners on their glitzy marquees, but for this weekend the hottest ticket in town once again belongs to boxing.

“The Mayweather-Pacquiao fight is an event that transcends not just boxing but sport in general,” said Peter Nelson, vice president of programming for HBO Sports.

“The quality of competition is what attracts fans. People want to see athletes at the top level of their sport in the toughest test imaginable.

“Greatness is more than talent, it’s seeking out moments of adversity and moments of reckoning and showing people what you can do in those moments.”

The fight will be broadcast live in Thailand from 10am on Channel 7.