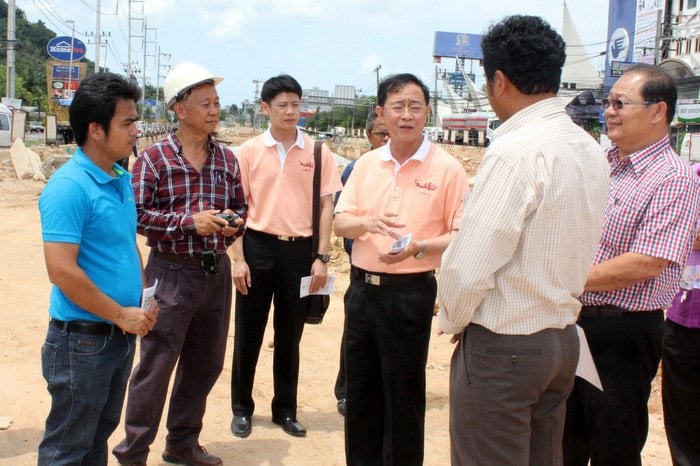 PHUKET: Deputy Transport Minister Arkhom Termpittayapaisith today announced that Phuket will receive funding of more than 1.3 billion baht to build underpasses at Bang Khu on the bypass road and at Chalong Circle.

Mr Arkhom delivered the news after inspecting the progress made on the Samkong Underpass in front of the Tesco shopping center on the bypass road this morning.

“Despite the project being nine per cent behind schedule, it is still on target for completion by the end of this year,” Mr Arkhom said.

Work began on the 850mn-baht underpass in September 2013 under a concession granting 720 days for completion.

During his visit today, Mr Arkhom confirmed that the Highways Department had been approved to allocate 600mn baht to build the Bang Khu Underpass, where Thepkrasattri Road joins the bypass road (stories here and here).

The Phuket Highways Office had also been granted a further 570mn baht to build an underpass at Chalong Circle (story here), he added.

“We are now in the process of looking for contractors for both projects,” Mr Arkom said. “We expect to confirm who the contractors are by the middle of June, and construction of both projects will start before the end of the year.”

The Department of Highways first publicly recognized the Koh Kaew Intersection as a ‘tailback blackspot’ in 2012. The move to build a flyover at the busy junction bypasses previous concerns with expanding the number of lanes there further. The junction already has six lanes; three each way (story here).

The plan to build a flyover at the Mu Dok Khao Intersection on Thepkrasattri Road in Mai Khao, where most of the traffic turns off to reach Phuket International Airport, aims to reduce the volume of traffic there.

Mr Arkhom also set a deadline of May 15 for local authorities to start charging drivers of motorbikes for using the recently completed Darasamuth Underpass.

“The underpass has been open for a month, and in that time we have noticed many motorbikes, including some with sidecars, driving through it,” he said.

“This is dangerous. There is no dedicated motorcycle lane through the underpass. After May 15, local officers will arrest and charge drivers, and they will make sure new signs and lights are installed to make sure all drivers understand the rules.”

The charge will be ‘breaking traffic regulations’, as indicated by traffic signs, for which the penalty is a fine of up to 1,000 baht, Mr Arkhom noted.

The practice of driving across the double solid lines south of the underpass in order to access or exit the street to Wichit Police Station will stop, he added.

“This is also very dangerous, and local officers will take steps to make sure this no longer happens,” he said.

The charge of ‘breaking traffic regulations’ will also apply to this, Mr Arkhom confirmed.

The move to ramp up safety measures at the Darasamuth Underpass follows the tunnel’s first accident last month, when the driver of a motorcycle with a sidecar escaped with his life after his three-wheeler was clipped by a passing truck.

The motorcyclist was trying to make a u-turn inside the tunnel when his vehicle was hit (story here).

Mayweather vs Pacquiao “Fight of the Century’ to break records