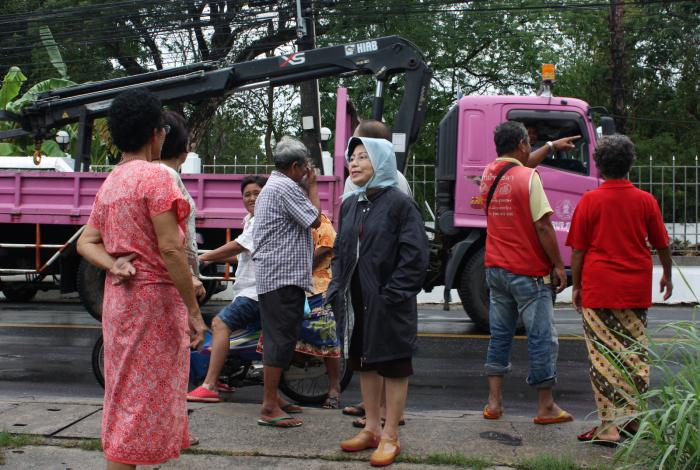 PHUKET: Phuket City Mayor Somjai Suwansupana took to the streets to hear out locals’ complaints after a deluge of rain during the past week caused flooding and chaos on the island.

Mayor Somjai knocked on doors on Amphor Road and discussed solutions with residents who live by the canal, about flooding in the area.

She also visited the Phuket Post Office building, near the Phuket Provincial Revenue Office, whose wall recently collapsed in the rain.

“Our staff has cleared the area so that people can use the road again,” said Mayor Somjai. “Meanwhile, I’d like to warn residents of floods because the rain is likely to continue.”

Municipality officials have been ordered to keep an eye out for any disasters – including floods and landslides – and remain alert for any emergencies.

Storm warnings, announced last week (story here), have now been updated to state that the rains will continue until at least tomorrow.

Officials are on standby to help anyone who needs assistance. In case of an emergency, residents are urged to call 1132 or 076-211111.