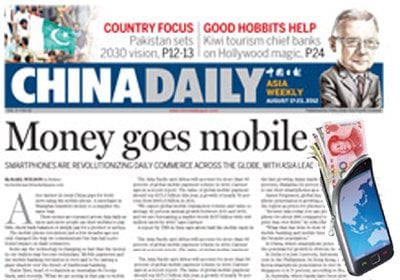 PHUKET: The Phuket Gazette is proud this week to be ushering into Phuket the China Daily Asia Weekly, a world-class publication built in Hong Kong by, among others, senior expatriate editors from the UK, the United States, Europe, India, Australia, South Africa and New Zealand.

Please find the launch issue tucked into this week’s Phuket Gazette, now on sale throughout the island.

Read Karl Wilson’s front-page story on how Asia is ‘leapfrogging’ Europe and the United States in smartphone growth and mobile banking, and how Kevin Bowler, CEO of Tourism New Zealand, plans to cultivate the high-end Chinese market by focusing on his country’s posh golf courses and luxury lodges.

The Asia Weekly is a rapidly growing part of the China Daily group, a mainstream media organization established in 1981 and now boasting a global circulation of 800,000.

The Asia Weekly provides authoritative information, analysis, and commentary with a focus on what could well be the most important long term ‘issue’ in the world today: China.

But the newspaper is not just about China. You’ll find articles from and about India, Russia, Malaysia, Singapore, Australia, Myanmar, Nepal – and yes, Thailand – as well as Wall Street, The City of London and anywhere else likely to hold interest for Asia’s expatriate readers.

You’ll also find stories from China Watch, the China Daily group’s monthly publication distributed to cosmopolitan readers as an insert in the Washington Post, the New York Times, and the Wall Street Journal, and across Europe in the International Herald Tribune and the Daily Telegraph.

We hope you’ll enjoy the Asia Weekly, this week and every week in your Phuket Gazette.