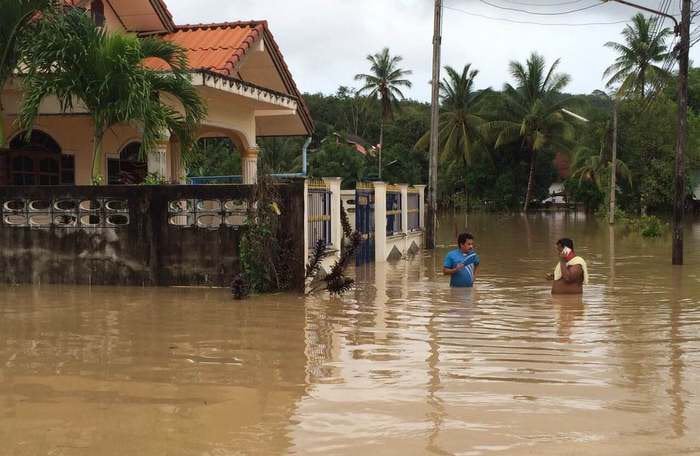 PHUKET: Local officials and Thalang District Chief Veera Kerdsirimongkol took their boats out to check on about 50 households in Baan Nai Yang yesterday after they were inundated with about a meter of water.

“The water has dissipated for now, but the coming rain may again trigger flooding,” said Mr Narong.

It took nearly six hours for the floodwater to go away, and residents have been warned to move their household items to higher levels.

“We have never had floods before. In the past, water flowed through just fine, but now I think a lot of buildings are blocking the waterway,” Mr Narong explained.

A road in Koh Kaew has also been closed off due to the heavy rains and flooding.

Soi Koh Kaew 33, a main route to Gazette Square and on to the British International School (BIS) from Thepkrasattri Road, is now closed to all traffic after local officials, led by Khuakiet Chitkhua, President of Koh Kaew OrBorTor, deemed it too dangerous to drive on.

“This road has been in bad condition for a long time [close to a year since about a 100-meter stretch of a full lane of it collapsed into a klong], but now we can start our work,” said Mr Khuakiet, adding that the rebuilding was scheduled to take about two months.

“But at this stage, we cannot promise that two months will be enough. The heavy rain has caused more damage,” Mr Khuakiet said.

“During construction, the road will be closed for safety. I do not want to see any accidents. Signs, barriers and lights have been put in place to block motorists from coming in,” he added.

“There are many back roads that are connected. We are sorry for any inconvenience. We will get the work done as soon as possible.”