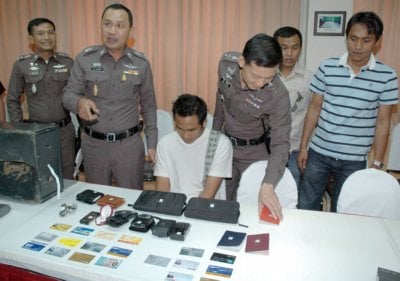 PHUKET CITY: Police yesterday announced that they had arrested a man for allegedly robbing Adrian Zecha’s villa at the exclusive Amanpuri, which the mogul developed himself as the first Aman boutique resort.

Gen Decha said that Mr Zecha filed a report with Cherng Talay Police at 9 pm on January 23, saying that many valuable items that he had kept in a safe in his villa had been stolen.

After inspecting the villa, police assumed that the thief was familiar with the resort as it has a tight security system.

Police found the safe and a shirt believed to have been worn by the thief about 100 meters from the resort.

Gen Decha said that the shirt was part of a staff uniform at another well-known resort. After checking company records, police discovered that Weerapol had previously worked at both resorts and had only recently ceased working at the Amanpuri.

Weerapol was arrested Monday evening when he visited his family’s home in Moo 5 in Rassada, where police were waiting for him.

Gen Decha said that Weerapol had confessed to stealing valuables from an Amanpuri villa.

Some of the valuables were later identified as belonging to Mr Zecha.

Cherng Talay Police Superintendent Col Peerayut Karajedee told the Gazette that, from the evidence seized, he believed that Weerapol had been involved in many thefts and that police will continue their investigation.