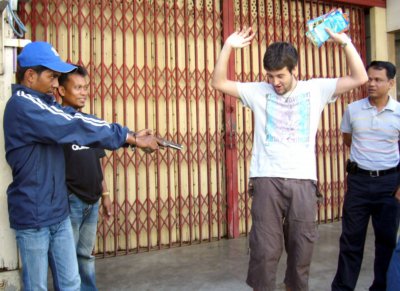 PHUKET CITY: Phuket City Police collaborated with Songkhla Police to bring in a robber who went on a one-month robbing spree around Phuket City armed with a fake pistol.

Satun-native Narathon Uraiwong, 30, who was arrested on Saturday, admitted to robbing two grocery stores, one 7-Eleven and one tourist, stealing a total of 21,900 baht, said Phuket City Police Deputy Superintendent Col Sompong Boonrat at a press conference on Sunday.

Narathon carried out the first of his robberies on December 29 at the Downtown Market on Ranong Rd. Armed with his plastic pistol, he robbed a foreign man and ran off with 900 baht, Col Sompong said.

On January 8, Narathon ventured into a small shop near the fresh market on Wat Naka Rd, where he held up the cashier for 13,000 baht before escaping on a motorbike, he said.

Narathon next tried his luck on January 22 at a small grocery store on Phun Pol Rd, this time making off with 4,000 baht, once again escaping on a motorbike, Col Sompong added.

Narathon’s spree ended with another 4,000 baht in his pocket after a January 25 heist at a 7-Eleven on Ranong Rd, said Col Sompong.

He added that several of Narathon’s victims gave descriptions of the bandit and told police the license number of the motorbike used in the getaways.

Police traced the motorbike to an uncle of Narathon, who told police that Narathon had borrowed it from him, he said.

The uncle said that Narathon often stayed with his girlfriend on Phun Pol Rd, but that he had fled to Songkhla after each robbery – where police found him, added Col Sompong.

“We then got a picture of Narathon from his girlfriend and showed it to all the victims. They confirmed it was the same man,” said Col Sompong.

Police were able to locate Narathon in Songkhla after speaking with his uncle, he added.

After his arrest, Narathon told police that he carried out the robberies because he needed money to pay off 100,000 baht in credit card bills, Col Sompong said.