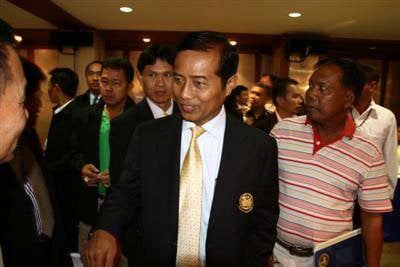 PHUKET CITY: Entertainment venues in 14 provinces around the south of Thailand have been put on notice to ensure they measure up to new government safety regulations or face the consequences.

Addressing a press conference at the Phuket Merlin Hotel on February 13, Deputy Minister of the Interior Thavorn Senniam announced deadlines for entertainment venues around the region to fall into compliance with the new ministerial regulations.

The new measures were not designed to deter investors, he said, but rather to regain people’s confidence and trust in the safety of the venues in question.

The inspection team will pay specific attention to fire safety measures, including the deployment and location of fire extinguishers, fire exits, fire alarms, entrances and exits, and so on.

The team will report its findings directly to the Minister of the Interior.

Deputy Minister Thavorn said the ministry will offer advice and guidelines to the entertainment venues. This will help them to make the necessary improvements and upgrades on time.

Entertainment venues need to work in cooperation with the government to ensure that an accident like the one that occurred at the Santika pub in Bangkok will never happen again, he said.

Once they have regained the trust of the people, their businesses will benefit, he added.

Following an inspection, the owners of entertainment venues would have seven days to carry out the necessary upgrades and improvements demanded by the inspection team. In the event that the changes were not completed within the stipulated seven-day period, the venue would risk having its operating license revoked.

It is not the government’s intention to close down entertainment buildings but simply to check that all venues adhere to the highest standards of safety and security, said the Deputy Minister.

The South of Thailand currently has 974 licensed entertainment venues. Within the region, Phuket tops the list with 345.

The regulations will be printed in the upcoming hard-copy edition of the Gazette.