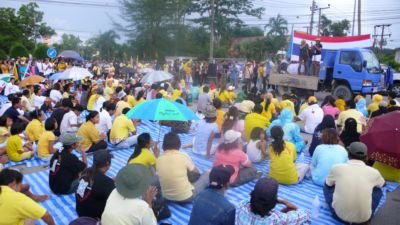 Udon Thani is a stronghold of the now-disbanded People Power Party (PPP).

The Phuket PAD supporters used vehicles with Bangkok registered license plates to avoid possible confrontations and returned to Phuket the next day.

There were no reports of violence but there was resistance from some local police, many of whom are still loyal to former prime minister Thaksin Shinawatra, said a PAD spokesperson.

There have been no PAD rallies in Phuket since protesters overran and forced the closure of Phuket International Airport for two days in October 2008, the source said.

The Phuket PAD leaders earlier distanced themselves from that event, saying those who disrupted airport operations were members of a “third party” sympathetic to the PAD’s cause but not actual PAD members.

The core Phuket PAD members were encamped at Government House in Bangkok at the time, they said.