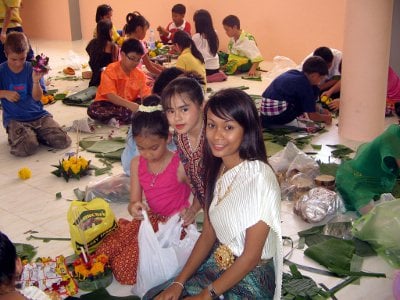 PHUKET: As the weekend approaches, people throughout Phuket and across the Kingdom are preparing for the annual Loy Krathong festival on Sunday.

Stages are being set up for entertainment and vendors are preparing for the droves of people who will float their krathong at popular sites in Phuket.

For those who have yet to decide where to spend Loy Krathong this year, here is a list of selected events:

6:30am, alms offerings to Buddhist monks

8am to 3pm, longtail boat races

7pm to 10:30pm, krathong floating on the lagoon; concert by “Gam, The Star”, winner of the 2008 season of the popular TV national talent quest The Star; Noppamas children’s pageant; krathong design contest, and much more at the Laguna Phuket Y-junction.

6:30pm to 9:30pm, Nong Noppamas beauty pageant for young girls, live performances by students, fashion show for the elderly and a cabaret show.

12:30pm to 11pm, activities including a drawing contest.

Rassada Municipality will hold their events at Monkey Point on Koh Sireh.

Srisoonthorn Tambon Administration Organization in Thalang will hold their festival with a “vintage theme” at the site of the old Bang Maruan Mine.

Stressing the importance of preserving the environment and minimizing the impact of thousands of krathong being released into waterways on the night, Phuket Provinicial Administration Organization President Paiboon Upatising has called for people to use krathong made from natural materials, such as the traditional use of banana tree stalks and leaves.