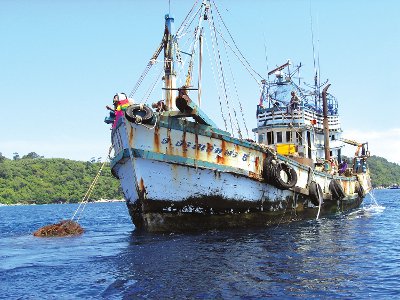 PHUKET: Having local residents and local Thai officials involved in public-awareness campaigns, such as the Go Eco Phuket’s “Dive Against Debris” underwater cleanup last month, is critical to their success, according to a recent online poll by the Phuket Gazette.

Following the “Dive Against Debris” reef cleanup, which set a record as the largest single simultaneous dive “cleanup” event in the world, the Gazette asked its online readers, “Do you believe that such events have a deep impact on the issue at hand?”

Despite the widely accepted success of the Go Eco Phuket event, more than 40% of respondents to the poll answered: “No, such events achieve little. Only long-term campaigns to educate the target offenders will ever have a genuine long-term positive effect.”

However, just over 26% of readers replied, “Yes, the event took physical action to achieve its goal and raised awareness of the issue” and a further 25% of respondents answered “Yes, but only if it is a unified effort involving locals and local government officials” – with the latter response providing the “tipping point” for such events to achieve their stated goals.

Less than a tenth of respondents (8.2%) answered, “No, because the mainstay of target offenders were not directly involved.”

The latest Gazette online poll asks, “A Gazette online forum contributor recently suggested foreigners make blood donations in lieu of visa runs. However, there are other ways foreigners living in Phuket can be of help to society. Which of the following options do you think is acceptable for a foreigner to earn an extension to their stay in Thailand?”

Phuket’s largest readership base brought to bear on expat forum