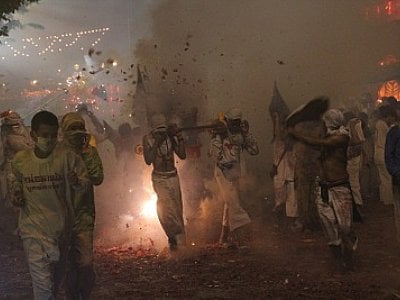 PHUKET: Thousands of people lined the streets of Phuket Town last night as the Vegetarian Festival drew to a close with street processions arriving at Saphan Hin for the midnight finale.

Devotees from all participating Chinese shrines in Phuket carried images of the Jade Emperor and the Nine Emperor Gods on palanquins as firecrackers blazed a protected path for the esteemed spirits, warding off any demons in their way.

Thousands of fire crackers were lit during the festivities, leaving the streets blanketed in smoke and resonating with the sounds of small – and sometimes large – explosions.

After the entourage of Chinese gods were sent their heavenly way with a huge bonfire, devotees turned to the hundreds of stalls that stayed open late to serve the annual banquet of non-vegetarian fare, helping those who took part in the festival to leave their nine-day fast behind.

As is tradition, the go teng poles at each Chinese shrine that the festival gods used to descend to Earth and return to Heaven each year were lowered at 3pm today.

After the poles were lowered, each shrine removed their nine festival lamps, marking the end of the Phuket Vegetarian Festival 2012.

The Vegetarian Festival will return to Phuket next year, possessing the island’s streets and shrines from October 5 to 13.