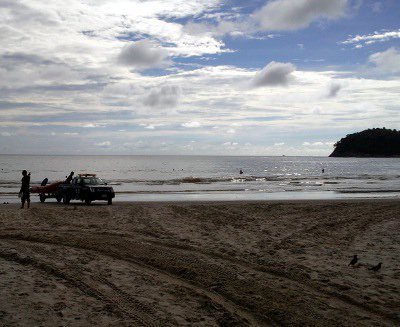 PHUKET: A local contingent of marine safety officials and conservationists have installed a “reef line” around the North Kata Reef to protect swimmers, scuba divers and snorkelers from boat traffic and to prevent damage to the reef.

Staff from the Marine Safety Center and volunteers from the environmental conservation organization, Go Eco Phuket, joined forces with local government agencies to complete the task on November 24 to 25.

The news follows a Russian tourist suffering serious injuries after being hit by a parasailing boat near the north end of Kata Beach on December 2 last year.

The project to install the reef line aims to avoid similar incidences occurring.

“It’s important that we set the buoy line out at the beginning of each high season in order to keep the jet-skis, longtail boats and speedboats from damaging it, as well as to prevent them from colliding with divers and snorkelers,” Go Eco Phuket member Joe Blasy told the Phuket Gazette.

“Much of Kata Reef lies just a few centimeters below the surface at low tide. We secured 10 mooring lines in six to 10 meters of water,” he explained.

Buoy lines were strung between the 10 mooring lines in order to clearly mark off the reef area.

Jet-skis and longtail boat operators were briefed about the need to steer clear of the buoy lines during a short meeting, explained Go Eco Phuket organizer Kerry Leach.

“There is now an area where tourists can enjoy the reef without being scared to death of boat traffic,” she said.

“We would really like to thank the Marine Safety Center staff for all of their assistance – we couldn’t have done it without them,” Ms Leach added.

Mr Blasy explained that the Go Eco Phuket marine conservation group have many more projects in various stages of progress.

“We have a lot of ideas on which direction to take Go Eco Phuket, including, but not limited to, the education of Thai youths on the importance of conservationism and environmental consciousnesses, fishing net ‘buy-back’ programs and even sinking more artificial reefs in the area,” he said.