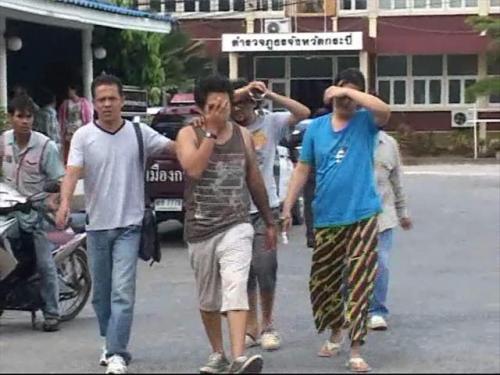 PHUKET: The three Thai musicians charged with the murder of American tourist Bobby Ray Carter Jr in Krabi on July 31 (story here) have refused to have the translator provided by the US Embassy in Bangkok involved in the trial.

The lawyer representing the three defendants explained the complaint to the judge at Krabi Provincial Court on Tuesday, when defendants Sathid Somsa, 40, from Bangkok, and Nopanan Yoddecha, 26, from Krabi, were both arraigned.

The other defendant, Ratikorn Romin, 27, from Phang Nga, was arraigned on Monday (story here).

The three men face charges for the stabbing murder of Mr Carter and for the assault of his son, Adam, 27, who was also stabbed in the fight outside the Little Longhorn Saloon in Ao Nang.

“They said it would be unfair, and insisted that they wanted to use the court translator,” Col Boontawee added.

The refusal to allow the US embassy-approved translator to be involved in the trial resulted in the postponement of the trial date being set.

“The court had to arrange a new translator, but as the arraignment was held late in the afternoon, the judge deferred the proceedings,” Col Boontawee explained.

“He has yet to set a date for the trial to begin,” he added.