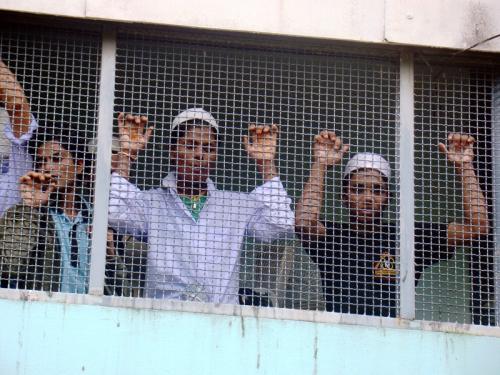 PHUKET: Over 250 Rohingya refugees raged against Phang Nga Immigration officers when denied the right to leave their cells and gather for mass prayer to mark Eid-al Fitr today.

Eid-al Fitr is one of the most important days for practicing Muslims, as it marks the end of the Islamic holy month of Ramadan (special report here).

“The refugees broke out of three detention rooms to gather at the exit gate, where they were almost able to make their escape,” Phang Nga Provincial Police Commander Chalit Kaewyarat said.

Maj Gen Chalit headed the about 100 officials present at the scene after the unrest broke out at about 9am.

All the Rohingya demanded to be let out to conduct a group prayer session, and some even demanded to be sent to other countries, a Phang Nga policeman said.

“Officials offered to let five of the protesters out at a time to pray, but the refugees refused the offer,” Maj Gen Chalit said. “Immigrations refusal to let them out en masse enraged the refugees.”

“Subsequently, they started shouting and trying to break down the exit-gate. Representatives from the Phang Nga Islamic Council were called to the scene to calm things down,” he said.

That tactic worked, but only briefly.

“They were calm for only a short time before they started protesting again, and repeated their attempts to knock down the gate. We sprayed water at them to deter them. Then the police added another metal gate as a precautionary measure,” Maj Gen Chalit explained.

“Once the protesters got tired, the situation calmed down,” he said.

After hours of protesting, some of refugees were transferred to another facility in Phang Nga, confirmed Pol Maj Gen Chalit.