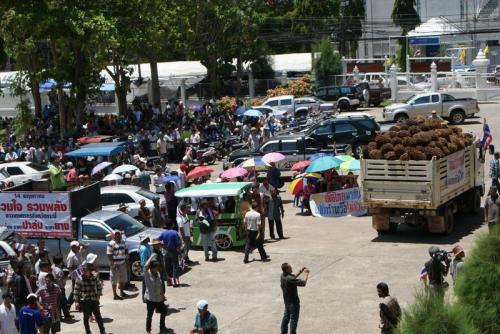 PHUKET: Krabi palm oil and rubber plantation workers have threatened to blockade Krabi Airport if the government does not increase the legal minimum prices for their produce by next Thursday.

More than 500 plantation workers gathered in front of Krabi Provincial Hall on Tuesday morning to file a complaint to be handed to Prime Minister Yingluck Shinawatra.

The complaint calls for the government to increase the minimum price of raw rubber to 120 baht per kilogram and palm fruit to 5 baht per kilo.

“If we have not heard anything back from the government 10 days from now [by May 23], we will block the airport,” protest leader Chamnan Makpol warned.

Mr Chamnan accused the national government of failing to provide assistance to farmers across Southern Thailand.

“We have been in a difficult period since Ms Yingluck was elected prime minister. The rubber and palm fruit prices have kept falling, but she has never really helped us. She just works on creating her good image from time to time,” he said.

“In the past, when she distributed 40 billion baht to help poor farmers, the money never went to us. It all went to the middleman. Poor people like us got nothing,” he added.

Mr Chamnan pointed out that plans to provide financial assistance to rice farmers across the North and Northeast of Thailand, the heartland of the ruling Pheu Thai Party’s voter base, were already in motion.

“The government should care about us more. They should not just think that we are ‘yellow shirts’ and ignore us, and support only ‘red-shirt’ farmers in the North and Northeast. They haven’t even grown the rice yet, but the government has already set up a budget to support them,” he said.

“We don’t want to pressure the government, but we want to let them know we are in serious trouble,” he added.

“I will report the problem to PM Yingluck immediately and will call in other relevant organizations to discuss it” Mr Weera said.

Satisfied for now, the protesters dispersed, but vowed to return in 10 days to see if their request is to be acted on.

Bangkok officers in Phuket to stamp out public butts