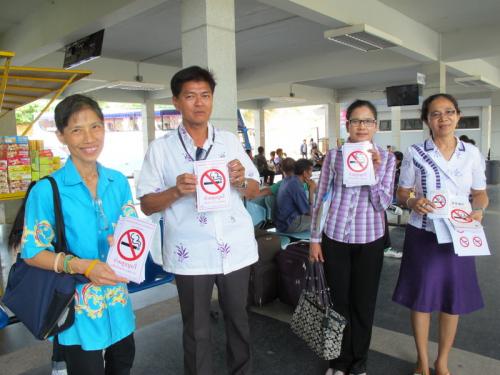 PHUKET: Flagrant disregard for non-smoking laws in Phuket has prompted officers from the Bureau of Tobacco Control in Bangkok to plaster Phuket International Airport, Phuket Bus Terminal 2 and a variety of private businesses across the island with no-smoking stickers.

“Most public areas are smoke-free areas by law, yet we still have found many tourists and local business operators disobeying the signs, despite having seen them,” Tobacco Control Bureau Legal officer Kanet Wongsa told the Phuket Gazette.

In addition to putting up no-smoking stickers, officers spoke with guards and staff to enlist their help in monitoring and preventing people from smoking in prohibited areas.

“It is possible that some people might not understand the law clearly or they do not take the law seriously. Either way, we are here to make sure there is change,” Mr Kanet said.

After an initial warning from a guard or staffer, a person can be reported to police and fined up to 2,000 baht.

“We have assigned the Phuket Provincial Health Office and the regional Public Health Office for all of Southern Thailand to survey public areas weekly and report to us,” Mr Kanet said.

Mr Kanet and his team will return to Phuket in two weeks to follow what progress, if any, is being made.