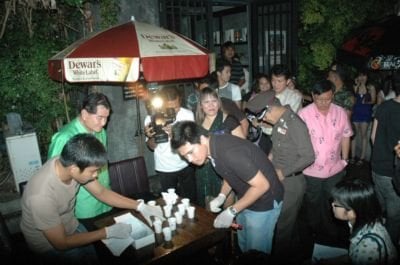 PHUKET CITY: To keep Patong free of drugs, Kathu Police have adopted a new strategy that focuses on a new method of random drug testing for nightclub staff.

The common test regimen involves adding a reagent to the urine samples. If the urine turns purple, the person is considered to be positive for ya bah, but the test needs to be confirmed by a blood test.

Under the new strategy club owners will call their workers for a staff meeting at which the surprise tests will be conducted. This will put an end to the need for having to raid clubs during peak hours with officials from a number of different agencies, he said.

Col Grissak said the project is already underway and working well. Those who test positive, both Thai and foreigners, are instructed to seek treatment, he said.

The new strategy is based on the assumption that most people who seek out narcotics source them from staff at nightclubs and other entertainment venues, he said.

“If we keep the clubs drug-free, tourists will find it hard to buy them,” he said.