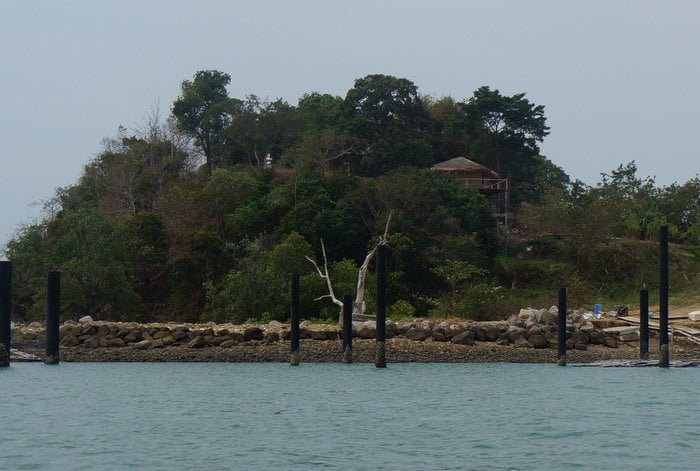 PHUKET: The Deputy Permanent Secretary of Justice today inspected four of 20 land plots believed to have been obtained through illegal land-title deeds or illegally developed.

The plots examined today are on Koh Raet, along Surin Beach and in Kamala, Deputy Permanent Secretary of Justice for the Ministry of Justice Dussadee Arayawuth explained.

Col Dussadee was the head investigator for the Public-sector Anti Corruption Commission (PACC) probe into alleged illegal lands in Phuket and was transferred to the Ministry of Justice on October 1, 2012 (story here).

“We are conducting the investigation following complaints from locals and NGOs made directly to the Ministry of Justice,” Col Dussadee said. “The complaints allege that Phuket officials illegally issued business owners Chanote titles and signed off on unlawful building permits.”

The first plot of land investigated today was on Koh Raet, off of Ao Por Pier.

“The owner of the land was issued a Chanote title by using a NorSor 3 Kor as a reference. That document reported that the land was being used as a plantation, allowing it to be released and owned with a Chanote,” Col Dussadee explained. “However, our inspection of the 161-rai island made it clear that there are no plantations.”

Officers circled the island in a speedboat, noting the dense jungle forest.

“We can see trees in the area that are more than 50 years old. Given this, a Chanote title cannot be legally issued,” Col Dussadee said. “We are sure that the information provided by local officials was falsified.”

The team later visited the La Colline estate, which was allegedly being constructed without having passed its Environmental Impact Assessment (EIA). Additionally, it was being built in an area about 120 meters above sea level – no buildings are allowed to be constructed more than 80m above sea level in Phuket, Col Dussadee pointed out.

The third area examined was an under-construction building along the road near Surin Beach.

“The building is being built in Zone 1, 20 meters from the sea,” Col Dussadde said. “Nothing is supposed to be built in Zone 1. Despite this, Cherng Talay Tambon Administration Organization (OrBorTor) officers issued a building permit.”

The final location visited by the investigation committee was the Kamala Beach Hotel and Resort, which allegedly sits on public land.

“We are sure that the Chanote for the land was illegally issued, as it is within a public park,” Col Dussadee said.

No property owners or representatives were asked to present evidence to the investigation team today. No charges were filed.

“We will be working with the Department of Special Investigation (DSI), PACC, The National Anti-Corruption Commission (NACC) and the Anti-Money Laundering Office (LMAO), as well as officers from other ministries during this investigation,” Col Dussadee said.

“The officials involved in the false reporting of information and the unlawful issuance of Chanote titles will be charged for abusing their power. The owners of the properties will face charges for accepting and using unlawful Chanote titles and building permits.”