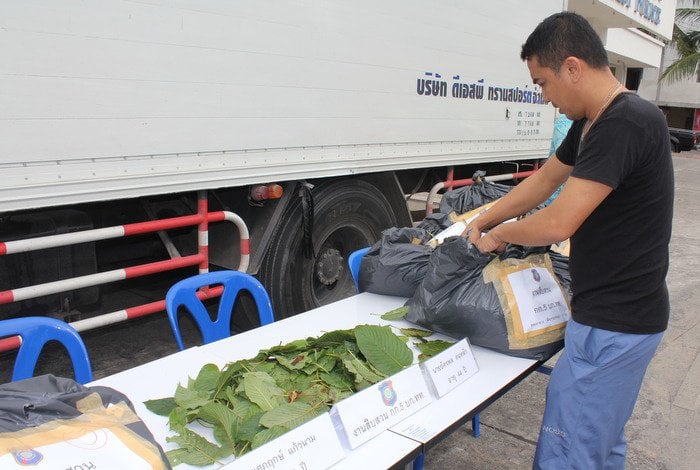 PHUKET: A shipment of 45 kilograms of kratom leaves from Nonthaburi to Phuket was intercepted by Phuket Tourist Police today.

“We had been tipped off by a source that a truck with the Bangkok licence plate 61-6211 would be delivering the leaves today,” Tourist Police Division 5 Superintendent Chusawat Janrojanakit said.

When police spotted the truck, they pulled it over and checked the documents of the driver, Akkapon Konluk, 46, and the passenger, Supharerk Kaewnam, 38. While searching the truck’s contents, police found 10 bags of kratom hidden among furniture items being delivered to Phuket.

“Yesterday afternoon, an unknown man called me, asking me to deliver the bags of kratom to Phuket. I accepted the job because I wanted the money,” Mr Akkapon said.

“The man who called didn’t pay me ahead of time. He said that someone would contact me when I arrived in Phuket, and that person would pick up the leaves and pay me. Unfortunately, I was arrested first.”

Both men were charged with possession of a Category 5 drug with intent to sell. However, Mr Supharerk denied any knowledge of the illegal cargo.