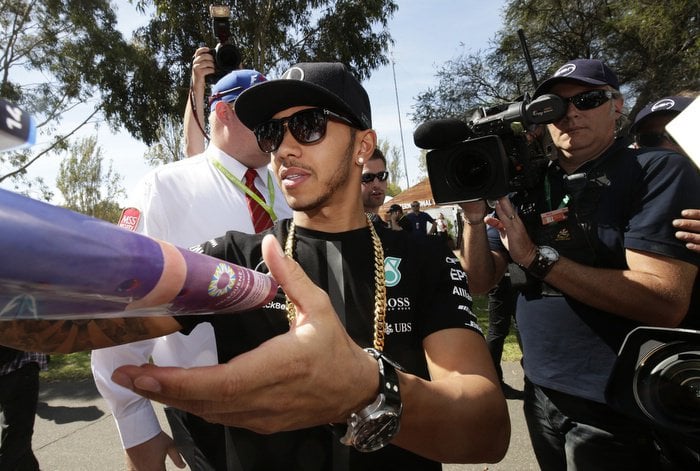 It’s the beginning of the new Formula 1 season. Melbourne is the first race. And there has been enough hype to fill an Agatha Christie bibliography: The Mystery of Sauber’s Secret Driver, the Strange Affair of Alonso’s Crash, The Case of the Youngest Rookie and McLaren’s Perilous Car. Despite all the hype, most fans think that this season will be a continuation of the last one.

I am writing this before the qualifying in Melbourne, but Mercedes looked strong throughout last season, and in testing looked equally powerful. The only question is whether Lewis Hamilton can become England’s first ever back-to-back champion or whether Nico Rosberg can thwart him. Nico was excellent at qualifying last season, but slightly less successful at winning.

The real question is what about the peloton? Williams is also fielding an unchanged team. Felipe Massa and Valtteri Bottas did very well last year, and Williams has probably improved the car over the close season. I think they will do well this year too.

But Ferrari is widely expected to stage something of a revival. Sebastian Vettel, having leaped from Red Bull, must be fired up by a chance to be popular again, and Kimi Räikkönen surely must do better than last season when he was quite dismal – I expect some fireworks from them.

I would expect either Ferrari or Williams to be on the podium in Melbourne with Mercedes, and I expect them to battle it out throughout Sunday. But if betting were legal, I would take a wager that Sebastian Vettel would take third place.

Red Bull has retained Daniel Ricciardo who did well last season, and has added Danny Kvyat. I expect they will win some races, and Ricciardo would dearly love to win in front of his home crowd. He would have to be lucky to do so, but no-one should ignore Red Bull’s capacity to surprise.

Everyone is writing-off McLaren. People say that Fernando Alonso is demoralized, Jenson Button is on his retirement season, the car is dangerous and Honda is too new to the game. But it is too early to write them off. We would all be surprised if they won in Melbourne, but with a few races under their belts they certainly could rise again. I really hope so.

That brings us to the rest of the field. Force India, Toro Rosso, Sauber and Lotus are competing with each other really to see who can become a force in the second tier. And there is a newly revitalized Marussia that is widely expected to carry the Red Lantern in every race; so they have nothing to lose, and will try everything.

The Albert Park circuit uses sections of road around a small lake. The surface of the track is quite smooth, fast and relatively easy to drive, though there few true straights and it is not conducive to overtaking. So qualifying is pretty important.

Turn 1 is a medium-speed corner that comes at the end of the first DRS zone, but is not a prime overtaking spot. The drivers accelerate into the full throttle Turn 2, and the second DRS zone begins down the following straight. Turn 3 is the most popular overtaking place as it is reasonably easy to outbrake the car ahead and pass on the inside or, preferably, on the outside which gives the inside of Turn 4. Turn 5 is a flat-out right-hander with high g-force, while turns 6, 7 and 8 form a complex at the back of the circuit. Turns 9 and 10 make up a slow chicane that leads to a short straight. Turns 11 and 12 are a high-speed, left-right chicane where the curbs can be an issue. Turn 13 is sometimes useful for overtaking. Turn 14 is an exciting right-hander followed by Turn 15; the slowest point on the circuit. Then, it is important to get a good exit from the near-flat-out turn 16 to race all the way down the pit straight.

As a rule of thumb, whoever qualifies on pole wins at Melboune. However, there are many examples of upset due to equipment failure in the lead car. The real excitement is that it is the first time that we will see the new cars, and new cars often have new problems. In 2012, Polesitter Lewis Hamilton lost an engine cylinder at the start of the race, and he was a DNF. In 2010, Polesitter Sebastian Vettel suffered from lost torque drive between the front left axle and wheel, and recorded a DNF. In 2006 Polesitter Jenson Button blew his engine. There are also a large number of incidents at Albert Park, perhaps because it is the first race and the Safety Car can be a big factor. And last of all, it is Melbourne, so the weather is never certain, and rain can always spice up the race. So don’t miss it.

The race starts at 8pm tomorrow. Qualifying is today at 9pm. Both will be shown on The Big Screen at the Green Man.