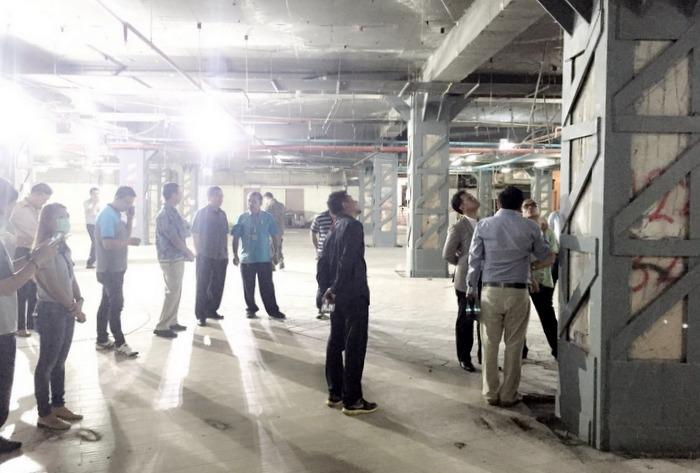 PHUKET: Jungceylon shopping mall in Patong was yesterday given permission to reopen a section of the complex that had been closed to make repairs to crumbling columns discovered in June.

The reopening came after the mall received approval from Phuket Governor Chamroen Tipayapongtada following a final inspection by engineers yesterday.

The shopping mall’s Port Zone was initially closed off after a municipal inspection on June 5 revealed that at least four concrete pillars in the mall’s basement indoor market had buckled. However, the rest of the shopping mall has remained open for business (story here).

Governor Chamroen and municipal officers made a final inspection of the column repairs in the mall’s Asian Spirit Zone and the Port Zone yesterday morning. After the inspection, the governor announced that the mall had followed all of Patong Municipality’s recommendations and could now be reopened.

Jungceylon management confirmed in a press release that about 10 shops will reopen in the previously closed-off area by Sunday. The announcement came after a delay of about a week following inspections by Patong Municipality which determined that more work was required to fulfill engineers’ recommendations (story here).

Patong Mayor Chalermluck Kebsup said she understood that the longer officials waited to approve the reopening of the zones, the more businesses in those areas would be impacted. Still, she said, the shopping mall will have to keep reporting to the municipality.

“I am aware that Jungceylon is fundamentally a business,” Mayor Chalermluck said. “We are happy to report that they are following all the technical and engineering suggestions from the municipality.”

Ms Chalermluck said Jungceylon will continue reporting and that Patong Municipality would continue to keep channels of communication open.