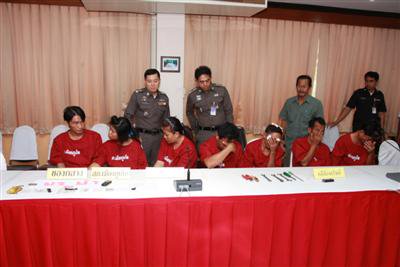 PHUKET CITY: Statistics for July released by the Phuket Provincial Police show that gambling was the most common criminal offense, with 177 people arrested in 47 cases.

The figure represents a 42.5% increase year-on-year.

There were also 23 arrests for involvement in the underground lottery, statistics for which are tabulated separately.

Among the contraband seized in the arrests were 3,712 ya bah (methamphetamine) pills, 17.5 grams of ya ice (crystal methamphetamine) and a kilogram of krathom leaves, a native plant used as a stimulant.

There were three premeditated murders in Phuket this July, down from seven in July last year.

Investigations led to arrests in two of the three cases.

There was also one case of manslaughter, which remains unsolved.

Despite the wide open trade in sex services on the island, there were just 92 arrests for prostitution, but even that was up 64.1% year-on-year.

Of these, there were eight reports of motorbike theft (+166.7% year-on-year), with arrests in all cases, and six snatch-and-run cases, with five arrests.

There were 18 cases of fraud and embezzlement reported, with no arrests.

From October 1 last year until the end of July this year there were 30 premeditated murders reported in the province, a decrease of 26.8% year-on-year.

There were arrests in 60% of the cases.

The leading Web forum on Phuket, the ‘Phuket Forum’ on ThaiVisa.Com, has been abuzz in recent weeks with strident dialogue about crime in Phuket and Thailand, generally. To see the widely varying, and often passionate, views on this subject, readers may wish to scan the forum here.