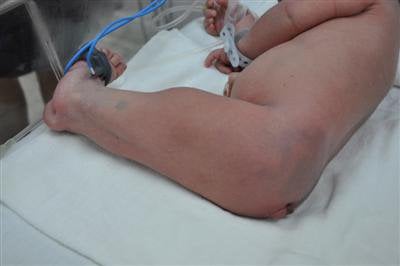 PHUKET CITY: Doctors in Haad Yai have successfully completed emergency surgery to create an artificial anus for the Burmese baby born with ‘mermaid syndrome’ in Phuket on Sunday night.

For the original report of the baby’s birth, click here.

A public relations officer at the Prince of Songkhla University Hospital, where the surgery was carried out yesterday, said the life-saving surgery was a success.

The infant, now confirmed to be a girl, will still need extended hospital care in order to survive, however.

Her tiny kidneys are not fully developed and she has an abnormal urinary tract.

The infant, whose name was previously given as ‘Sui’, in fact remains unnamed.

She is the third child born to a Burmese mother named Sui who lives in Phuket.

Most die a few days after birth due to complications associated with abnormal kidney and bladder function.

There are a few cases of mermaid syndrome babies living to adulthood, however.

The oldest is 21-year-old Tiffany Yorks of the United States, who underwent successful surgery in order to separate her legs.