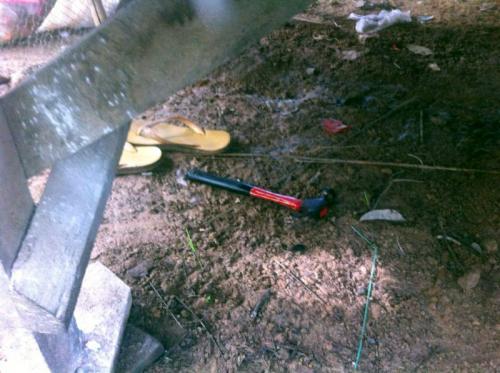 PHUKET: A man confessed to killing his wife with a hammer yesterday because she moved to Krabi to live with her daughter, leaving him alone in the Isarn province of Yasothon for about a year.

Jaran Triphoom, 79, was found by police clutching a bouquet of flowers in a rubber plantation hours after the discovery of his wife’s body, said Adisak Thabpha of the Klong Thom Police.

“He wanted to pay his last respects to his wife, Sangka Triphoom,” Capt Adisak told the Phuket Gazette.

Police were notified of the murder at about 7am by Mrs Sangka’s 48-year-old daughter, Patchara Saenaprom.

“This morning, I came to their house to invite my mother for breakfast at my place, which is nearby. Outside of the house, I found her body, but couldn’t find my stepfather,” Ms Patchara told the police.

Police raced to the scene to find Mrs Sangka’s bloodied body on a bed in front of the house and a hammer under the bed.

“Previously my mother lived in Yasothon with my stepfather. I thought that because of their advanced years, it would be better for them to stay with me. I asked them to move to Krabi so I could take care of both of them,” Ms Patchara said. “My mother came first and stayed here for a year. Five days ago my stepfather moved in.”

Though Mr Jaran confessed to killing his wife for having left him alone in Yasothon, police are continuing to look for additional motives in the killing.

“We are continuing our investigation to find the exact motive for the killing, as we believe the man might be suffering from some form of mental illness,” explained Capt Adisak.