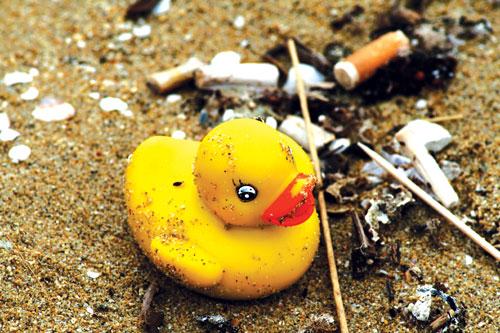 First some negative ones. “Tainted Tide”, a recent Phuket Gazette front page article, revealed that Patong’s already polluted beaches had suffered yet another setback – a patch of brown, unwholesome water in the bay, perhaps a mindless discharge of sewage from local hotels, or a build-up of plankton, courtesy of contaminants in the sea.


V-Gov Sommai leads mangrove replanting. Video: Phuket Today
Talking of mindless spills, Koh Samed recently experienced an oil discharge – 50,000 liters of oil from a PTT pipeline leaked into the island’s waters. It was the fourth largest spill in Thai history. At Shark Point, only days ago, a huge and illegal gill net was surreptitiously draped over the famous dive site. Bad news for the fish and coral colonies, potentially even worse news for submerged divers. Three illegal resorts built offshore on Koh Samet have just been dismantled, but, alas, not before lasting damage has been inflicted on the fragile ecosystem of the seabed.

Back on “terra firma”, the picture is no better. One reads of “illegal loggers” who have “ravaged over 100 rai of forest” in Bang Khanoon, cutting down at least 50 protected Eaglewood trees, a threatened and commercially valuable species. At the north end of Cape Panwa, a swathe of National Forest Reserve has been razed to the ground.

Recently vandals destroyed tracts of mangrove forest south of Chalong, without any material reason for so doing. One could go on with this litany of destruction without even mentioning speedboat “cowboys”, over-fishing, illegal wildlife trade in ivory, pangolins or tokays , land encroachment and development, or the endless dumping of rotting piles of garbage.

There are, however, encouraging signs. Beach clean-ups by schools and environmental groups, a number of campaigns such as “Dive Against Debris”, largely initiated by the dive community, the work of Seek, an organization “set up to work with the local community”,

Go Eco Phuket’s emergency clean-up at Shark Point dive site.
Video: Phuket Today
Go Eco, a marine conservation group allied with local business and government, these and many more are contributing to an increasing sense that something must be done, and done soon.

Some forward-thinking resorts, Viridian, Movenpick and Avista for example, are showing that up-scale developments can offer a green experience.

There is a catch-phrase associated with environmental awareness which goes: “think globally, act locally”. A timely reminder of how all of us, as eco-conscious members of Phuket’s community, can both help to rectify these misdeeds on our own patch and increase awareness of the wider picture.

It goes without saying that these malpractices are not confined to Phuket or even Thailand. Despoliation of the natural world is an ongoing global phenomenon; resulting extreme weather patterns dominate our daily diet of news. Floods in Eastern Russia, the worst for 120 years, record levels of inundation in parts of Myanmar, North India and China, a typhoon in the Philippines. Not so long ago, half of Queensland was under water.

Krix Luther’s Boot Camp Beach Cleanup. Video: Phuket Today
If it’s not too wet, then it’s too dry and too hot. A recent headline in the China Daily screamed: “Meltdown ahead”. There have been weeks of atmospheric pollution in Malaysia from blazing forests in Sumatra. A double whammy. Dirt at one end; destruction at the other. And as I write, parts of California’s Yosemite National Park are ablaze, with an area larger than metropolitan Chicago reduced to smoldering ash. Redwoods and giant sequoias, the largest and oldest trees on the planet, are being torched. The cost of all this is staggering.

According to environmentalist Dr Jeff Masters, “at least five billion dollars of weather disasters hit earth during June” – from droughts in Brazil, New Zealand and China to floods in Alberta, Central Europe and Argentina.

Of course, some of these events can justifiably be put down to caprices of nature, as media coverage reinforces our sense that we all live, cheek by jowl, in a global village.

Nonetheless, the sheer scale of these catastrophes makes nature less than consistently culpable. Though doubters continue to argue otherwise, most experts now agree that climate change is driven by man’s destruction of the planet’s natural heritage, by factors such as de-forestation and urbanization.

Act now and save the earth! Click to enlarge image.
Why?

Because while rain-forests and oceans help to redress the balance by absorbing harmful pollutants, man and his infernal machines continue to pump these effluents back into the atmosphere. When nature’s resources are depleted past the point of no return, then raised levels of carbon dioxide and worse, gases such as methane, become a suffocating presence. Hence global warming and extremes of climate.
In Phuket, we can hardly ignore the seas that envelop us. But are we aware how crucial they are to the salvation of the planet? Healthy oceans generate 70 per cent of our oxygen and absorb much of the carbon dioxide produced by man. Though we still know little about them, they drive the worldwide weather, our climate and the chemistry of the planet. They provide a home for most of the creatures on earth. Yet we are polluting and destroying these marine ecosystems before we even begin to understand them. Trawlers and factory ships vacuum up not just fish but everything in their path.

“People don’t know there’s help for them,” Mr Stanley explained to the Gazette.

“Consuls will all help people But perhaps the most mind-boggling effect of global warming – since it is remote and unseen – is occurring in the frozen wastes of the Arctic.

A NASA sponsored mission called “Carve” has issued a doomsday warning. It argues that the region’s permafrost is warming even faster than Arctic air temperatures. And here’s the rub. Vast reserves of carbon and methane are stored deep within this permafrost, a layer of frozen soil that covers 9 million square miles of Canada, Finland, Norway, Russia, Sweden and the United States.

For eons, this frozen tundra, like a giant freezer, has trapped more carbon than it has released. But if this massive area becomes drier and warmer – and this is already happening – scientists believe that most of the stored carbon will be released as carbon dioxide. Yet more ho

A village on the edge: San Tin