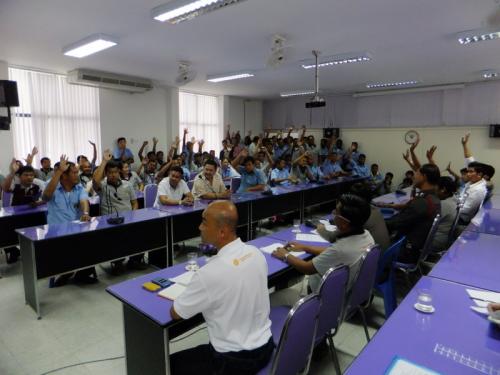 The election was part of a move to restructure the taxi rank at Central Festival, the latest step in a campaign to eradicate taxi mafia from Phuket which has the full support of the Department of Special Investigations (DSI) and the Phuket Land Transportation Office (PLTO) (story here).

“We want Central Festival to be a model of taxi management for Phuket,” said Maj Natapol Ditsayatham, the DSI Chief Investigator for Phuket. “We want every driver to be able to work freely without worrying about the mafia.”

At the meeting today, drivers rallied behind 42-year-old Pom Sukkasam, who was arrested on Sunday along with his brother (story here).

Both men were handed three charges of extortion, and both men deny them.

“I voted for Mr Pom because he is not guilty [of the extortion charges]. He takes care of us like a big brother, and he wants to improve taxi services and working conditions,” Booncherd Saekoo, a member of the taxi group, told the Phuket Gazette.

“Almost all of us respect him and like his ideas on how to improve our working conditions,” Mr Booncherd said.

Mr Booncherd explained that the fees collected by Mr Pom were reasonable: 200 baht a month for all members, and an additional daily fee of 10 baht a day for legal taxi drivers or 20 baht for illegal taxi drivers.

“That money is used to help members when they get sick or are in need,” Mr Booncherd explained.

When facing charges in Bangkok, Mr Pom maintained his innocence, insisting that the complaint was filed against him by a member of the group that did not support initiatives to legalize all taxis operating at the shopping mall.

“I have been pushing to make all the taxis at Central Festival legal, but this guy didn’t like it,” he said.

During the meeting today when Mr Pom was re-elected, Central Festival Phuket Operations Division manager Preecha Ritthiratree made it clear that all taxis operating at the shopping mall must be fully legal by November 30.

“All taxis should complete registration before the high season begins,” said Mr Preecha.

The November deadline pushed by Central runs far ahead of the PLTO extended deadline, which asks that all taxis be registered by the end of February 2014.

In addition, the Central taxi group was asked to arrange themselves as a formal co-operative by the end of the month.

“They need to make all necessary arrangements by September 30. This includes creating a member list with detailed personal information of the drivers, a photo of the driver and cars that meet the legal standards to be operated as a taxi (story here), Chief Transport Technician of PLTO Jaturong Kaewkasi said.

Jaran’s hammer: 73-year-old beaten to death across the bay from Phuket