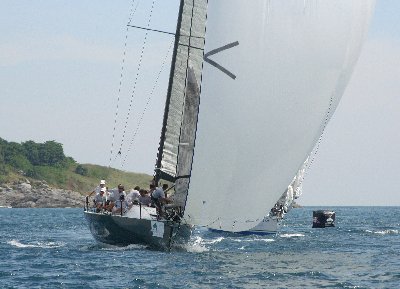 KATA: Despite Ray Roberts’ Quantum Racing winning both races on Friday, December 5 in the Racing class of the 22nd King’s Cup Regatta, being held off Kata Beach, Winkelman and Dodd’s Island Fling has retaken the lead in the class with consistently good sailing.

Before starting the day’s racing, the 94-boat fleet this morning staged a “sail-past salute” past the Royal Thai Navy frigate anchored offshore Kata in honor of His Majesty Bhumibol Adulyadej’s 81st birthday.

The racers were then graced with ideal sailing conditions, with winds ranging from eight to 15 knots and relatively smooth sea.

With one race to go today, the last day of the regatta, Island Fling has so far scored one first place and five second-place finishes to accumulate 11 points, two points ahead of Quantum Racing.

Frank Pong’s Jelik is back in fourth place overall after finishing fourth and fifth in the two races yesterday.

A top battle is lined up for today between Japan’s Kenchi Takahashi and his crew on Motor Net and overall class leader Scott Duncanson and his crew on Raimon Land The Heights.

Another battle brewing on the bay is between Peter Cremers’ Shahtoosh and David Ross’s Macquarie – Frangipani Girl in the Premier class. Both have scored seven points, but Shatoosh leads marginally on countback.

Sailing well for the home country are CPO.3 Wiwat Poonpat on Royal Thai Navy 1, who lead the IRC 2 class two points ahead of fellow Thai sailors NC Pontap Sukudom and crew aboard Royal Thai Navy 2, who have 10 points.

In the Firefly 850 class, comprising only Firefly 850 catamarans, which are all built in Phuket, Peter Dyer’s SEA Property leads the class with six points, ahead of Hans Rahmann on Voodoo Child on nine points.

In the other Multihull class, Radab Kanjanavanit’s Seamico Cedar Swan, a long-time regular in the King’s Cup, leads with a nigh-unassailable (no pun intended) five-point lead over Bob Brindley’s X Cat Riot, which is in second place with 13 points.