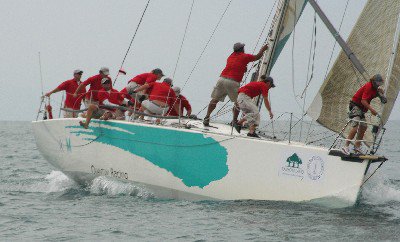 In one of the tightest competitions ever in the King’s Cup, the win moved Quantum Racing into first place overall in the class and the right to have her name etched on the coveted King’s Cup trophy.

As an example of the high standard of sailing in this year’s Cup, which had seven of the 11 race classes still up for grabs before yesterday’s final races, Island Fling, who led the class just the day before, finished fifth by just 16 seconds to place third overall in the Racing class.

In another nail-biting finish, David Ross’s Macquarie – Frangipani Girl beat Peter Cremers’ Shatoosh to move into first place overall in the Premier class. The day before, Shatoosh had led the class.

John Wardill’s Australian Maid, a long-term regular in the King’s Cup, finished third in the class.

In a fine display of competitive sailing, Scott Duncanson and his crew on Raimon Land The Heights held off rival Kenichi Takahashi on Motor Net to place second and third respectively in the Sports boat class.

By focusing on keeping Motor Net in their wake instead of going for an outright win, The Heights, which is better known in Phuket as Somtam Express, held on to their first place overall and won the Sports boat class.

Matt Allen on Ichi Ban dominated the IRC 1 class throughout the regatta with six “bullets” (sailing jargon for “first place”) and one second-place finish, and needed only a mediocre result to win the class.

Despite Thailand’s recent political upheaval and the temporary closure of Bangkok’s two international airports just days before this year’s King’s Cup opened on November 29, the regatta attracted a fleet of 94 boats and well over 1,000 people.

Unlike some previous years, this year’s regatta was graced with near perfect sailing conditions throughout, providing some of the most memorable racing maneuvers and results. Many of the racers told the Gazette that they look forward to returning to contest the cup again next year.

For more results from today’s final races – and for the finalized overall results – visit www.kingscup.com.