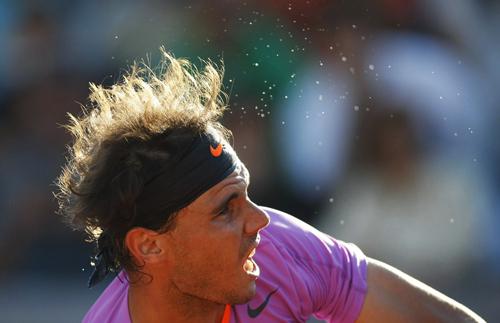 PHUKET: Ireland prop Cian Healy has been cited for stamping on England’s Dan Cole during a maul in the first half of their 12-6 Six Nations championship loss in Dublin on Sunday, tournament organizers said yesterday.

Healy contravened Law 10.4 (b), which states that a player “must not stamp or trample on an opponent.”

The Ireland player will appear before the tournament’s disciplinary committee in London tomorrow.

Ireland lost winger Simon Zebo for up to 10 weeks with a broken foot sustained in the bruising loss to England while three members of their starting pack picked up knocks.

Give me more time before judging me, says Nadal
Reuters / Phuket Gazette

PHUKET: Rafa Nadal’s worst defeat on a clay court for nine years offered ammunition to the naysayers but the Spaniard says his recovery from knee injury should be judged over time.

The seven-times French Open champion’s narrow loss to Argentine world No. 73 Horacio Zeballos in Vina del Mar on Sunday was rightly regarded as a shock as Nadal’s defeats on clay over the past eight years can be counted on two hands.

Even those rare reversals have come against players of the calibre of Roger Federer and, most notably Novak Djokovic in 2011 and the last time he lost to a player outside the world’s top 20 on clay was five years ago in Rome when former world number one Juan Carlos Ferrero got the upper hand.

You have to go back to Palermo in 2004, before Nadal had won his first French title, to find the Spaniard losing to one of the game’s journeymen, Frenchman Olivier Mutis who was then ranked outside the top 100.

Zeballos, who had never won a title before, played admirably but Nadal was clearly not firing on all cylinders despite reaching the final without dropping a set.

The analysis began immediately afterwards with all eyes focused on Nadal’s movement for signs of the left knee problems that meant he had not played since a shock defeat at Wimbledon last year to Lukas Rosol.

Worryingly for Nadal’s million of fans, the 26-year-old openly admitted the knee was still causing him pain.

“The knee is still bothering me, but you have to face adversity with the best possible face and look forward to keep working and enjoy what I like the most, to play tennis,” world No.5 Nadal said on the ATP website.

Whether or not the pain is just the result of not playing competitively for so long, or something more serious, remains to be seen but Nadal was clearly relieved that he could compete at a high level in the nine matches he played in six days, including doubles.

“A week ago we didn’t know how the body would respond,” the 11-times grand slam champions said.

“At least now I know we can compete at a certain level. I think that was a positive week.

“I will try to keep improving my physical sensations day by day, which is the most important thing because I don’t feel that my tennis level is bad. I need more time on court.”

Nadal’s defeat was only his fifth in 41 clay court finals with the others coming against Federer and Djokovic.

“I was two points away from winning the title, but I said from first day that the result was not the most important thing, although I would’ve liked to win,” he said.

“To win four matches in a row is good news for me.”

Nadal moves on to Sao Paulo this week for an indoor clay court tournament and after a week off completes his south American comeback in Acapulco, Mexico.

Those two tournaments may offer a more reliable guide as to the chances of Nadal reaching peak from in time for the European clay court swing in which he did not lose a match last year.

PHUKET: Lotus are confident next week’s second pre-season test in Barcelona will see no repeat of the failure that halted the Formula One team’s efforts at the Spanish track a year ago.

Then, as this year, Kimi Raikkonen and Romain Grosjean had looked quick in the first test in Jerez only for an unexpected problem with the chassis to surface when they got to the Circuit de Catalunya.

The team had to pull out of that 2012 test and return to the factory after Grosjean had done seven laps.

“We had a problem last year because we designed a single joint poorly. We had created a suspension mounting which was capable of withstanding the loads if it had been made absolutely perfectly,” technical director James Allison explained on the team’s website (www.lotusf1team.com) yesterday.

“However, that style of joint was very difficult to make accurately enough to get repeatable performance from each chassis.”

The joint on the chassis used in Jerez last year was fine but the one on the second car taken to Barcelona was slightly different and failed.

“Once we realized our error we redesigned the joint,” said Allison. “On the (new) E21 (car) we’ve paid particular attention to this area so we’re not expecting any repeat dramas.”

Lotus were quickest with Grosjean and Raikkonen on Wednesday and Friday respectively in Jerez last week. Raikkonen, third overall in the championship last season, had been quickest on day one at the southern Spanish circuit last year.

Allison said the new car looked both competitive and reliable.

PHUKET: Manchester City have one realistic chance left for a title and should they fail in the FA Cup at the weekend against second-tier Leeds United, manager Roberto Mancini will find himself under even more scrutiny.

Already criticized for his blaming of players and refusal to support those who have had a bad game, the Italian knows that with their Premier League chances all but gone Sunday’s clash with Leeds is vital to his survival.

A lack of movement in the transfer market by City pre-season and in January have exposed Mancini’s league title holders this term, highlighted by another failed Champions League campaign.

A 12-point gap to make up on leaders Manchester United after a 3-1 defeat at lowly Southampton on Saturday led Mancini to blast his team’s poor performance and players performing “without strength and personality”.

“When you play football and you are a top player, you should take your responsibility, always,” Mancini was quoted as saying in The Telegraph newspaper.

“It’s not always the fault of the manager. The players should take responsibility.”

Key performers last season, goalkeeper Joe Hart and midfielder Gareth Barry, both made horrendous errors at the weekend to gift the hosts their second and third goals.

Even their imposing midfield engine Yaya Toure, back from the African Nations Cup, was well below his best, while fellow midfielder Javi Garcia had to play at centre back against Southampton such is City’s lack of strength in depth.

Few City fans would argue with their manager’s assessment that Saturday’s abysmal loss was the side’s “worst game in two or three years maybe.”