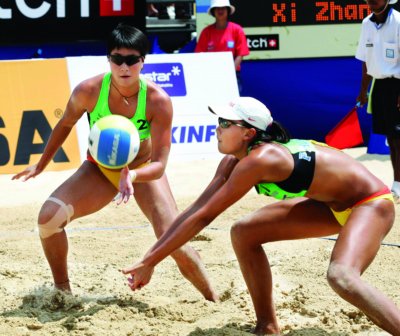 KARON: The world’s top beach volleyball stars will grace the sands of Phuket at the Second Phuket Thailand Open, the last stop on the Swatch-FIVB Women’s Beach Volleyball World Tour.

The tournament, to be held at Karon Beach from October 31 to November 4, has a prize purse of US$200,000 up for grabs, with top international teams ready to compete in one of Asia’s biggest beach-volleyball tournaments.

Qualifying rounds will be held on October 31, with the main competition from November 1 to 4. Matches will commence from 9 am daily, except on finals day, when matches will start at 4 pm.

More than 80 teams from 30 countries have signed up for the tournament, with entries still open.

The caliber of the entrants is high, with the likes of world number one pairing Juliana Silva and Larissa Franca from Brazil set to take on Chinese opposition from the world number two team of Tian Jia and Wang Jie and the 2006 champions Zhang Zi and Xue Chen.

The USA’s Misty May Treanor and Kerry Walsh, the current Olympic and world champions, are also in for the tournament. Other countries represented include Belgium, Cuba, Sweden, Holland, Norway and Russia.

Dane Selznick, coach of the American Olympic duo, said, “The Phuket Thailand Open is the only open event on this year’s calendar that has drawn a field of the same strength as a Grand Slam tournament.”

As hosts, Thailand will have two teams competing in the main competition, with an additional four set to take part in the qualifying rounds.

Admission to the tournament is free, and if the sporting action isn’t enough to entertain, there will also be cheerleading contests and volleyball training camps held every day.

The semi-finals will take place November 3, with the third-place playoff on November 4, all to be televised along with the final on Eurosport across Europe from 4 pm until 6 pm on both days.