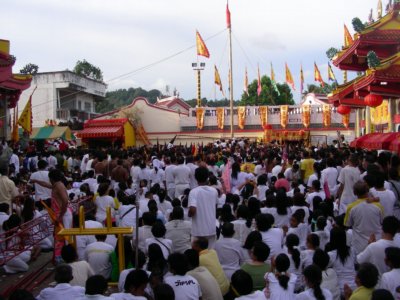 PHUKET CITY: Thousands of people gathered at Chinese shrines around Phuket today to participate in pole-raising ceremonies before for the Vegetarian Festival, which starts in earnest tomorrow.

Permanent Secretary for Interior Pongpayom Wasaputi joined the crowds dressed in white at Jui Tui shrine to place squares of gold leaf on the bamboo poles before they were raised at the auspicious time of 5.09 pm.

The poles are said to join the physical and spiritual world, allowing the various spirits to descend to Phuket, where their presence will be evidenced by the 2,000-odd mah song, or “mediums”, during the festival.

Traffic will be disrupted during the festival from October 11 to 19 due to road closures for processions and the many vegetarian food stalls lining the streets as part of the festivities.

Click here for details on procession times and routes