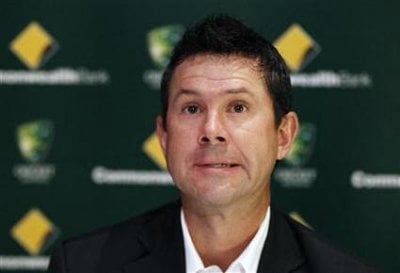 PHUKET: Australia’s Ricky Ponting announced his retirement from international cricket today, telling a stunned news conference he would be calling time on his glittering 17-year career after this week’s third test against South Africa.

The former Australia captain has scored 13,366 runs in 167 tests – the second highest haul in the long history of the game – and stands behind only the great Don Bradman in the ranks of Australian batsmen.

“A few hours ago I let the boys know of my decision to make this test my last,” Ponting, who turns 38 next month, told reporters.

“It’s a decision I thought long and hard about. It was based on my output and my results in this series so far. It hasn’t been what I expect of myself and certainly not the level required of a batsman in the Australia team.

“I’ve said all along that I would continue to play as long as I could continue to make a contribution to wins, and I think over the last couple of weeks my performance has not been good enough to do that.

“I’ve given cricket my all, it’s been my life for 20 years, there’s not much more I can give.”

Ponting, who stood down from the test captaincy last year and retired from one-day cricket in February, has scored nought, four and 16 in his three innings so far in the series against South Africa.

He stressed the decision had not been prompted by the selectors and said it was not hard to miss out on one final Ashes contest next year because he realised he was not good enough to get there.

Ever the arch-competitor, Ponting said the time to look back over his career would come after the Perth match, which starts on Friday and where he will equal Steve Waugh’s Australian record of 168 tests.

Victory for Australia would see them leapfrog South Africa to return to the top of the test rankings – a position they enjoyed for so long with the gritty Tasmanian in the team.

“It’s a great opportunity. We’re going into what I believe to be almost a Grand Final,” Ponting said.

“As I said to the boys this morning, I’m hungrier than ever and I want this win probably more than any other game I’ve played.

Amazing players
Ponting made his test debut at the age of 20 against Sri Lanka at the WACA a week shy of 17 years ago, making 96 in his one innings as Australia won by an innings and 36 runs.

“Ricky is always uncompromisingly straightforward and leads from the front – he has made a decision that he believes is best for him, his family and his team,” said Cricket Australia Chairman Wally Edwards said.

“On behalf of Australian cricket, I congratulate him for his outstanding achievements as a batsman, captain and, after he stood down as captain, leader by example.”

The whole Australia team and Ponting’s family had filed into the weights room under the stands at the WACA, to the great surprise of the journalists gathered for Michael Clarke’s scheduled captain’s news conference.

“I’ve got a few months of cricket yet and I’ll enjoy that for what it is,” said Ponting, who will play out the season with Tasmania.

“This is my new team here,” he added, pointing to his wife Rianna and daughters Emmy and Mattise.

After a rousing round of applause, an ashen-faced Clarke finally had his say and admitted that his predecessor and mentor’s announcement had come as a surprise.

“Ricky spoke to me after the Adelaide test match, and made his decision over the last little while,” he said.

“The boys are obviously hurting at the moment. He’s been an amazing player for a long time.

“That’ll do for me today,” he added after a long pause as he struggled unsuccessfully to contain his emotions.