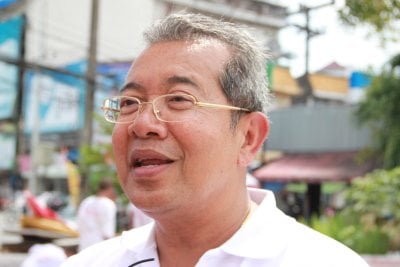 PHUKET: Uncertainty clouds the announcement of a firm date for the Andaman World Experience, postponed from November 9, as officials scramble to identify dates when Prime Minister Yingluck Shinawatra will be available to attend.

Chanchai Doungjit, Director of Tourism Authority of Thailand (TAT) Phuket office, told the Phuket Gazette that the festival would go ahead and that the schedule would be announced within the next few days.

“The previous Minister of the Prime Minister’s Office, Woravat Auapinyakul, wanted the festival to go on, as does the new minister, Sansanee Nakpong, but they cannot confirm a date right now,” said Mr Chanchai.

However, Mr Chanchai continued by saying that initially a festival press conference was scheduled to be held on December 6 in Bangkok by Prime Minister Yingluck Shinawatra, but he was told that the date had to be changed.

“At the moment the plan to hold the festival in December is still uncertain,” he added.

Mr Chanchai pointed out that Phuket Vice Governor Sommai Prijasilpa is concerned about the delay and has tried to coordinate with Minister Sansanee’s secretary to get the date confirmed as soon as possible.

Given the shortage of time to arrange everything, Minister Sansanee has floated the idea that the Andaman World Festival be merged with the Patong Carnival, which will be held on December 15-20.

“The minister’s proposal is being considered. Either way, we expect an accurate schedule to be announced in a few days,” said Mr Chanchai.

Former minister Woravat told the Gazette in early November that he expected the festival to attract more than 20 million tourists to the Andaman region.

Phuket Sports: PIST hooks all as Sunshine Village cleans up