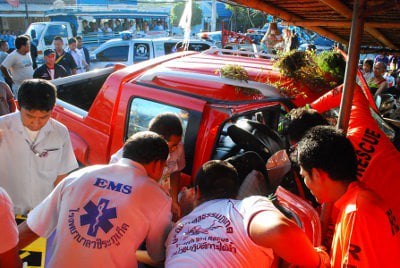 PHUKET: Phuket police have named the schoolgirl who died in the tour van crash this morning as Kulnaree Lattuada Lancini, 9 years old, a student at British International School (BIS).

Kulnaree was in the rear seat of a pickup truck that was making a “school run” when the accident occurred at about 6:40am, he explained.

“Three other students were in the back. They are all fine. They suffered only minor injuries, just some bruises and scratches,” said Lt Kraisorn.

Kulnaree was to be dropped off at BIS.

The tour van driver and the driver of the pickup were both pinned behind the steering wheels in their vehicles by the force of the impact.

“It took rescue workers 25 minutes to get them both out,” Lt Kraisorn said.

All of the injured, students and drivers, were rushed to Vachira Phuket Hospital in Phuket Town.

“The pickup driver, aged in his 30s, suffered injuries to his abdomen and legs. The van driver suffered an injury to his left ankle,” Lt Kraisorn explained.

“The tour van struck another van from behind, then crossed the center line into the path of the oncoming pickup truck,” he added.

A company representative at tour company Pegas Touristik denied any responsibility for the accident.

“We do not own the vehicles or employ the people who drive them,” she said.

Although the tour van involved in the accident was painted in Pegas Touristik white and featured the company logo, it was also marked as belonging to Apitchaya Destination Co Ltd.

Pegas Touristik made headlines two weeks ago when a tour bus painted with the company logo struck and killed an aunt and her niece while travelling at high speed on the main road to Phuket Airport.

The driver of that bus fled the scene. Police have now been issued a warrant for his arrest.