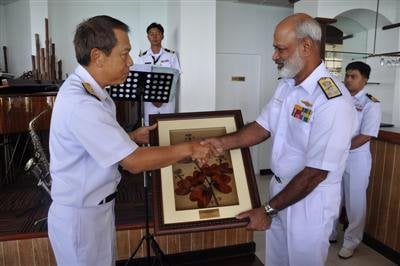 PHUKET: Some 900 Indian Navy midshipmen are shipping out from Phuket this afternoon after taking part in training exercises aboard three visiting Indian warships: the INS TIR, the INS Krishna and the ICGS Varuna.

The four-day training exercise began on Sunday. The Indian vessels ship out this afternoon from Ao Makham to the Nicobar Islands. From there, their next stop will be Cochin City in India’s Kerala State. The three Indian training vessels’ last port of call was in Burma.

In addition to the training, the sailors also had some fun when a team of Indian midshipmen played a friendly football match on terra firma against a Royal Thai Navy team at Rajabaht Phuket University yesterday. The Thai sailors won the match 3-1.

V/Adm Choomnoom said the Thai and Indian navies continue to enjoy a strong and positive relationship.

The Indian visit follows a similar training exercise by the Thai Navy in India, he said.

India and Thailand are jointly responsible for preventing terrorism, piracy and securing maritime safety at the north end of the Malacca Strait, which starts off in Phuket and runs between the Malay peninsula and the Indonesian island of Sumatra. Half of the world’s shipped oil moves though this strait.

Some of the vessels that visited Phuket Deep Sea Port will be of interest to military maritime buffs.

The INS Krishna, now under the command of Cdr Nirbhay Bapna, was originally commissioned into the British Royal Navy in 1968 as HMS Andromeda, a Leander-class frigate that saw action in the 1982 Falklands War.