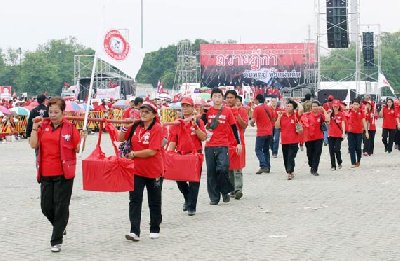 PHUKET TOWN: The majority of Phuket Gazette readers do not think Friday’s Supreme Court ruling on Bt76 billion in assets linked to former Prime Minister Thaksin will have an impact on Phuket’s tourism economy, according to the latest readers’ poll.

As of this morning, over 475 readers cast votes in the poll.

Overall, 66% of readers thought the ruling would not affect the Phuket tourism economy, compared to 34% who thought it would.

Well over half of readers (68.5%) thought the Court would rule to seize more than half of the assets.

Almost half (46.1%) of those casting votes thought Mr Thaksin would have all or most of his assets seized, but that the seizure would not have a significant impact on the Phuket tourism industry.

About half that amount (22.4%) thought most or all of the assets will be seized, and that the seizure would have a significant impact on the Phuket tourism economy.

Almost one-fifth (19.9%) of those casting votes thought less than half to none of the assets would be seized, and that the ruling would not have a significant impact on the economy here.

The least popular response (11.5%) was that the Court would rule to seize less than half of the assets, and that this verdict would have a significant impact on the Phuket tourism industry.

In a breakdown by demographics, local foreign residents (49%) and tourists (43%) were more convinced than their Thai counterparts (46%) that the court would seize the majority of the assets, but that the verdict would not affect the economy here in Phuket.

Overall, local foreign residents (69%) were the most confident that the impact of the ruling would not have a significant impact on the tourism economy in the province, compared to 64% of those identifying themselves as tourists and 52% of Thais.

Have you cast your vote? Do so by clicking here or on the icon on the top right corner of this page.