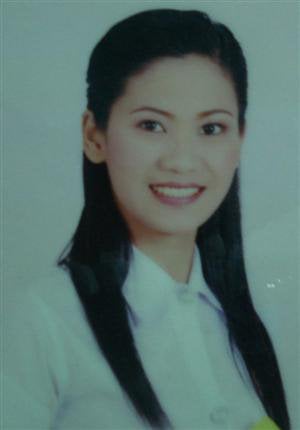 PHUKET: Police are hunting for the boyfriend of a Supercheap employee found strangled to death in her room yesterday.

Miss Thipkasen ‘Khwan’ Heep-phech, 24, was found in her room in Koh Kaew by a colleague after she was absent from work for two days. She had a mobile telephone charger cord wrapped around her neck and a pillow over her face.

Police believe the native of Nakhon Sri Thammarat may have been raped.

Miss Monthira Saiyarin, who found the body, said Miss Thipkasen was always cheerful, well-liked by colleagues and never had any arguments with anyone.

Miss Monthira’s supervisor told her to go and look for Miss Thipkasen after she missed work for two days in a row and could not be reached by telephone.

Miss Monthira found the door to her colleague’s room unlocked. The victim’s possessions, including her bank book, were scattered all over the floor of the small room.

Before her death, Miss Thipkasen had been seeing a man named ‘Khao’, Miss Monthira said.

She did not know his full name, she added.

Mr Khao paid the victim’s rent and bought her a motorbike, she said.

The pair had recently had an argument after Mr Khao asked Miss Thipkasen to return money he had given her, Miss Monthira said.

She had not seen the man since then, she added.

Police believe Miss Thipkasen was killed at least two days before her body was discovered. Officers are now hunting Mr Khao to question him over the killing.

Police listed rape or robbery as other possible motives for the attack.