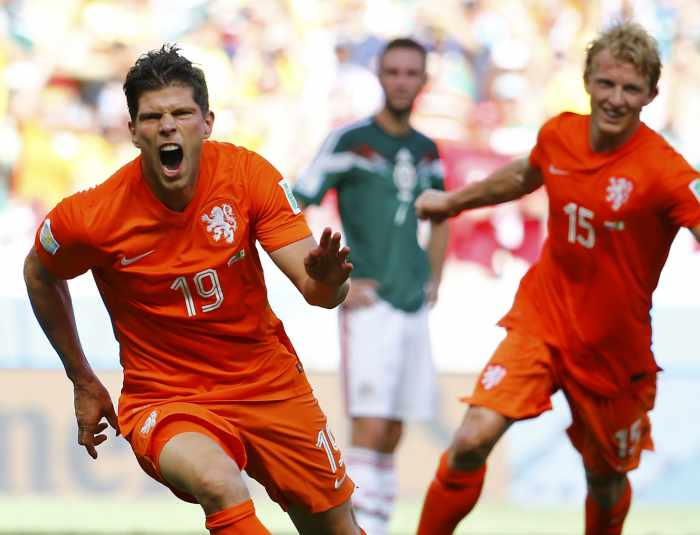 PHUKET: A stoppage time penalty from Klaas-Jan Huntelaar gave the Netherlands a dramatic 2-1 victory in the World Cup second round on Sunday minutes after Mexico seemed certain to reach the quarter-finals.

With two minutes to play Mexico were leading 1-0 but Wesley Sneijder pulled the Dutch level with a fierce drive, seemingly forcing the match into extra time.

Then, in stoppage time at the end of 90 minutes, Mexico captain Rafael Marquez was judged to have tripped Arjen Robben in the penalty area and Huntelaar calmly converted the spot kick to take the Dutch through.

They will play either Greece or Costa Rica in Salvador next Saturday and will fancy their chances of making the last four.

“It was a nice moment for me but also for the team,” said Huntelaar, who came off the bench in the 76th minute to set up Sneijder’s equaliser and then convert the penalty.

“I had a good feeling and Arjen came to me and asked me do you want to shoot so I took the ball and shot it in the corner,” he told ESPN. Mexico coach Miguel Herrera said: “We’d done really well. Then the team sits back and we start to give chances to a team that had not done anything.

“It’s a World Cup where everything was against Mexico. Unfortunately, we didn’t achieve what we wanted.”

It was a cruel ending for the Mexicans, who dominated much of the last 16 match and took the lead three minutes after the break through forward Giovani Dos Santos.

He chested the ball down 30 metres from goal before firing a low left-foot shot into the bottom corner of the net.

The Dutch almost equalised 10 minutes later when their big centre back Stefan De Vrij forced a brilliant reflex save from Guillermo Ochoa. The keeper parried the effort on to his left hand post and his defenders cleared it to safety.

The Netherlands stepped up the pressure in a bid to find an equaliser and just when it seemed their efforts might be in vain, a corner from the left was headed down by Huntelaar and Sneijder struck a sweet drive that flew into the net.

Before Mexico could recover the Dutch were awarded a penalty when the tricky Robben was brought down by Marquez and Huntelaar stepped up to send Ochoa the wrong way and seal the victory.

The Dutch win followed their swashbuckling performances in the group stage, including a 5-1 thrashing of holders Spain, as their quest for a first World Cup title goes on.

They have now reached the last 16 at six consecutive World Cups and have lost each time.